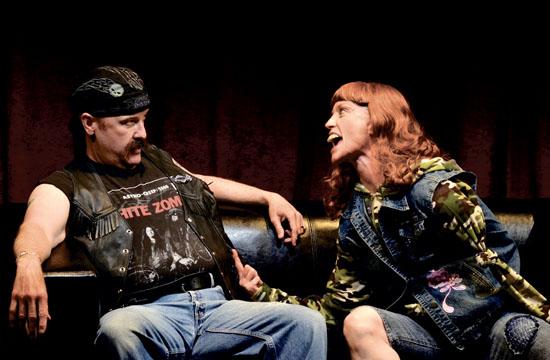 Santa Monica resident Mark Roberts, renowned playwright and the creator of the CBS television series “Mike & Molly,” is this month taking to the stage as one of the leads in his one-act comedy “Couples Counseling Killed Katie,” which opens today at the Pico Playhouse and runs Fridays and Saturdays through Dec. 1.

His comic spin on seven couples going through therapy turned the production into a cult phenomenon and showcased his talent to television executive Chuck Lorre who immediately hired him as a writer on “Two and a Half Men.”

After rising through the ranks to executive producer, Roberts created “Mike & Molly,” because he felt there needed to be a series that showcased real people going through real issues.

Last summer, Roberts returned to the stage with a revival of “Couples Counseling Killed Katie,” which he starred in alongside “True Blood” actress Jessica Tuck.

The production was such a success that it was nominated for two Ovation Awards and he decided to do a second run this November.

“It’s an hour of big laughs and simple fun,” Roberts said. “Jessica Tuck and I play seven different couples trying to work out their differences in couples therapy and it’s a lot of crazy quick costume changes, insanity, and exaggeration.”

He said all of his writing comes from real life experiences.

“I had just broken up with a girlfriend when I wrote ‘Couples Counseling Killed Katie’ and had some obvious issues to work out,” he said. “Most of the characters, although greatly exaggerated, are based on real people. My plays are usually about emotional things I’m dealing with or need to deal with. A way of spilling out my psyche onto paper in a dramatic and hopefully entertaining way. So I wrote this one pretty quickly.”

He said the play is something people can relate to.

“Everyone understands dysfunction on some level or another,” he said. “And it’s darn funny if I do say so myself.”

When asked what the main differences are between writing TV and theater, Roberts said he could say things on the stage that you can’t say on television.

“Life is often a little grittier than we see on television and on the stage, you can take out those stops and let the emotions go where they will,” he said. “Theater has been a part of my sanctuary for as long as I can remember. It is a part of my history and what got me excited about arts in the first place and I think it’s important to explore deeper themes, as a person and in my work. But TV actually pays and has better food and better parking.”

He has several projects in the pipeline in both theater and television.

Roberts said he moved to Santa Monica six months ago to the Ocean Park neighborhood near Main Street.

He said he enjoyed vegan food and the vibe of the city.

“I’m never not working,” he said. “But, I do try to make time to take long walks on the beach.”

“Couples Counseling Killed Kate” is on stage every Friday and Saturday at 8 p.m. now through Dec. 1. All tickets are $20. Pico Playhouse is located at 10508 West Pico Boulevard, Los Angeles 90064.

For tickets or more information, call 800.838.3006 or visit cckk.brownpapertickets.com.