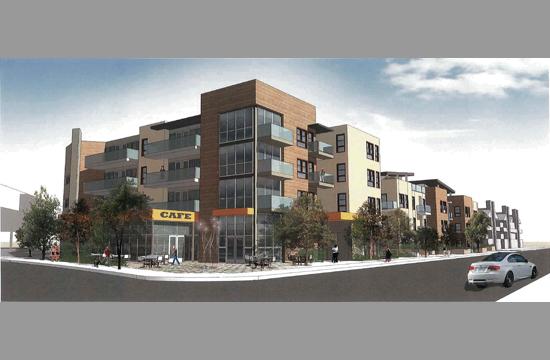 Development company Trammell Crow made its case to push the development forward as part of a float-up session, hoping to gain City Hall’s backing in exchanging the former home of the company that staged the Grammys, according to City staff, a four-building mixed-use development.

According to the City staff report issued to council members, the buildings would be between two and four stories in height that would include approximately 2,999 square feet of ground floor commercial area, and approximately 505 parking spaces within a two-level subterranean parking garage.

The project site consists of three contiguous parcels with a total of 112,056 square feet located on the south side of Pico Boulevard between 34th Street and Centinela Avenue, City staff added.

“This site is unique in many regards,” Ames told council members. “Many people … will suggest this site should not be developed at all. That’s not entirely realistic.”

Ames also told council members their vote was not for project approval but instead to allow him to enter the environmental review phase.

The project is also scaled back from what was originally presented to the Planning Commission, Ames pointed out.

Specifically, Ames explained the project size was reduced from 300 apartment units to 260 and the overall property was scaled back 16,400 square feet. Retail space was reduced 2,000 square feet, more open space was added along 34th Street, and setbacks were increased.

Yet the big concern was the project’s relative location to Interstate 10: the development comes as close as 19 feet to Santa Monica Freeway. Accordingly, council members requested Trammell Crow to further analyze the environmental impacts of having a mixed-use project so close to the freeway.

More than three dozen speakers addressed council members during the public hearing segment of the float-up.

Most concerns were related to increased health, safety, and traffic problems.

Others urged council members to holistically consider every development in the vicinity of the Grammy Building.

Diana Gordon wrote to council members on behalf of the Santa Monica Coalition for a Livable City (SMCLC).

“SMCLC urges this Council to ensure that the float up process includes cumulative review of all proposed projects in the vicinity, including the massive Casden project proposed at Pico and Sepulveda and the Martin Cadillac project proposed at Olympic and Bundy,” Gordon said. “This information is critical in order for the Council to assess the reasonable size and neighboring impacts of this Trammell Crow project.”

Resident Jackie Stansbury wrote to council members saying the community did not need more reasons for non-residents to travel to Santa Monica.

“As a resident, I no longer attempt errands downtown after 11 a.m. because I know that I will not be able to park,” Stansbury said. “I also know that the eight-minute trip back to Sunset Park could take thirty minutes during high traffic periods.”

Mayor Pro Tem Gleam Davis contemplated the prospects of a reduced project or altering the mix of use of the development, such as altering the balance of commercial and residential space.

Council member Kevin McKeown said he would find it difficult to vote in favor of the project.

“This project shouldn’t go forward as it’s been floated to us,” he said. “It’s out of scale for the neighborhood. It puts residences too close to a freeway. It’s not a suitable project. I don’t think this project can be made to work.”

Council member Pam O’Connor was not present for the vote.