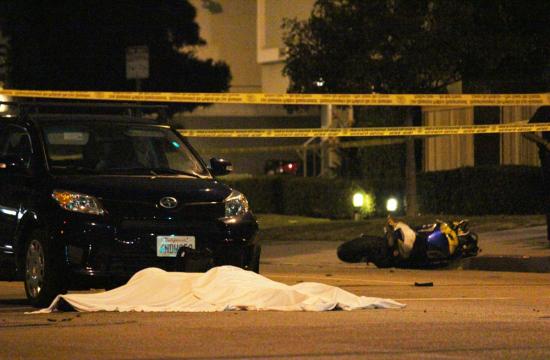 A motorcyclist was killed in a traffic accident just before 5 p.m. Wednesday involving a SUV on S. Bundy Drive between Olympic and Santa Monica Boulevard in West Los Angeles.

The damaged motorcycle ended up on the sidewalk at the scene of the accident, which was at the intersection of Bundy and Missouri. A black SUV was parked in front of the body.

One person was confirmed dead “due to a traffic accident,” according to West Los Angeles police at the scene.

The collision snarled traffic in the area with police rerouting motorists to alternate routes.

According to LAPD Public Information Officer Rosario Herrera, the victim of the accident was male.

According to Herrera, the Los Angeles Fire Dept. pronounced the man dead at the scene.

Name of the victim has not yet been released as LAPD is still in the process of informing the victim’s next of kin.

Check back at smmirror.com for updates as more details become available.