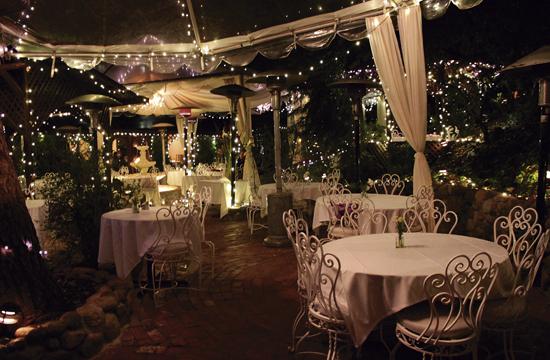 Topanga Canyon has been home to the Inn of the Seventh Ray restaurant for the past 37 years, which is tucked in the hills only a stone’s throw away from Santa Monica.

It is 4.5 miles up into the hills of Topanga, which is accessible from the Pacific Coast Highway.

The restaurant has undergone a culinary redesign these past few years under Executive Chef Bradley Miller, who took over the kitchen in July 2010.

When Miller came on board, he said the main challenge he faced was getting people to see the new face of the Inn.

“People still think it’s a vegan/vegetarian restaurant, which it actually has never been,” Miller said. “It just got that reputation because that’s what people ate when they came up here. Now that we’re a modern kitchen, we still focus on what made this place great to begin with, which has always been the use of farmers market ingredients, seasonal ingredients, and keeping everything as local as possible.”

He said his menu featured dishes with sustainable fish and natural meats, but also accommodates vegans and vegetarians.

Prior to taking charge of the Inn of the Seventh Ray, Miller worked under the guidance of Joachim Splichal at Patina in downtown LA. Prior to that, he was a chef in several restaurants in Arizona.

He said he was excited for the opportunity at the Inn.

“I started making gradual changes for the first couple months and then threw it into gear after about six months,” he said. “Normally that is not the way chefs do things, but I really wanted to make permanent changes that stuck with the cooks, servers, and of course, our guests.”

The Inn features modern American dishes, but has influences from France, Spain, and Japan.

Miller said he lets the seasons dictate what he puts on the menu.

“I don’t try and stick to one direction, I just make the food taste the best it can possibly taste,” he said. “Whether that be tempuring Kombocha squash or making potato foam with a 63 degree duck egg we get from our neighbors, we really just try and make everything taste the best it can.”

The restaurant serves up some unique dishes.

The Pumpkin Puree with 24 hour Sous vide pork belly is served with a smoked scallop mouse and maple syrup, a dish definitely inspired by the season that features squash sourced from the Santa Monica Farmers Markets.

Out of the restaurant’s fish options, the roasted Black Cod stands out with miso shallot puree, tamarind, and winter root vegetables.

The restaurant is also gearing up with a traditional Thanksgiving menu with all the fixings.

“Thanksgiving is one of those things I don’t mess with,” Miller said. “We do a traditional Thanksgiving dinner that makes you wish it was all year round.”

Inn of the Seventh Ray