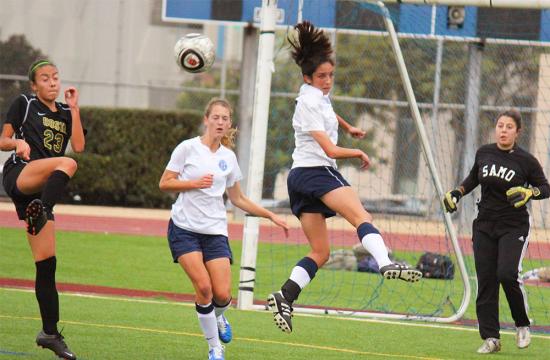 The Santa Monica High School girls soccer team lost their first game of the season at home against Mira Costa 2-0 with the Mustangs working well together to snap the rhythm away from the Vikings Wednesday afternoon.

Mustangs Head Coach Patty Perkinson thought that it was a great win for the Mustangs.

“We were missing twelve of our starters,” said Perkinson. “It was a great battle because we only had two subs so the girls just worked hard.”

Samohi’s Girls Soccer Head Coach Jimmy Chapman thought that the game was a “reality check” for the Vikings soccer team, and that the loss to Mira Costa shouldn’t dictate the course of the season as they won a scrimmage against Notre Dame 3-1 last week playing “excellent team ball.”

“We were missing some players and they were missing some players so it should have been pretty even,” said Chapman. “In the first five minutes, they were lucky to not be down 1-0, but the rest of the game we were lucky not to be down more then what we were. I think it balanced out at the end. The team that was winning the small battles, the aggressiveness and movement of the ball, was Mira Costa.”

Many starters on both teams did not play due to the fact that many of the girls are still playing club soccer and can only be showcased leaving them ineligible to play until club soccer season is over as mandated by CIF soccer rules.

“To be showcased means that you can’t play high school soccer until your club soccer is over,” said Chapman.

But due to the benching of many of the starters from both teams, players who rarely get a chance to shine were given the opportunity to play.

Samohi’s Lana Saykali started as goalkeeper for the Vikings and was honored as player of the game even though the Vikings lost 2-0 to the Mustangs.

“We will have our girls back for our next game,” said Chapman. “But as far as I’m concerned, those girls will have to work their way back into the lineup. I had my starter as a keeper, Lana Saykali, and she had an outstanding game. She did the best with what she had so she’s going to stay there.”

Next game for the Vikings is home against Redondo Union Monday at 3 p.m.