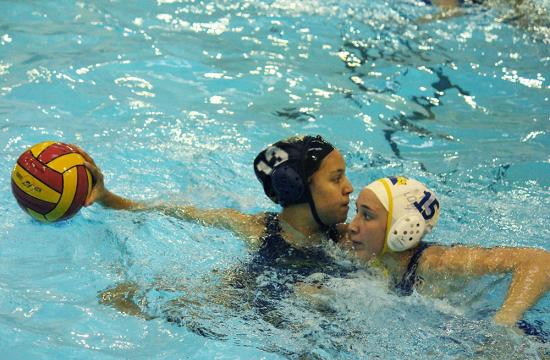 The Samohi Girls Waterpolo team beat Louisville High School in their first game of the season at home with shooter and captain Jessie Espera scoring five goals to drive the Vikings to victory over the Royals Wednesday afternoon.

Santa Monica High School Girls Waterpolo Head Coach Matt Flanders thinks that the Vikings have a lot of talent but that more needs to be done to utilize their skills.

“We have a lot of work to do and we have a lot of talent but it’s not really coming together yet,” said Flanders. “We have to play some games, get some more game experience, and try to go from there.”

The Vikings went up 4-1 on the solid play of Espera, who scored two goals in the second quarter and one in the third, before the Royals caught up by scoring four goals to make the game 5-4.

From there, Espera scored two more goals to lead the Samohi’s attack while the Vikings defense kicked into gear to hold on for the win 8-6.

Espera felt that the game went “really well,” for the Vikings.

“Personally, I was really nervous and then after I was more calm,” said Espera. “All our swimming in the mornings and our double practices at day works and has paid off.”

Flanders thought that Espera stepped up and played “the hardest today.”

“Jesse was pretty timid at the beginning but she really took the team and lead the team by scoring most of the goals,” said Flanders. “She was the most consistent.”

Next games for the Vikings are away in the Benson Cup Tournament at Esperanza High School starting Thursday at 3 p.m. and continuing through Saturday ending at 6 p.m.