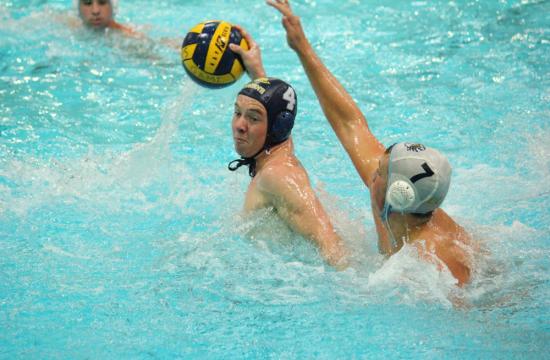 After an amazing season where Santa Monica High School went 8-0 in the Ocean League, the Vikings waterpolo attack was shut down Saturday afternoon by Los Osos 15-6.

All-League shooter Jackson Hauty was held by the Los Osos defense and was unable to score.

Shooters Robbie Staenberg and Matthew Cianfrone added a few goals to the Vikings talley but Hauty was unable to shake off the double team to be effective in the game.

The defense for the waterpolo Vikings also shut down and allowed a rare fifteen points to be scored off of Vikings goalie Jack Schwartzman.

“Matt always puts together a steller squad so we had to make sure to play stellar defense,” said Cypher. “We really tried to be focused on the backboard and we really tried to be aggressive in the offense arena and came up big in the defense arena. In the end, we had a lot of energy which allowed us to get on top.”

Vikings waterpolo Head Coach Matt Flanders was disappointed with the loss and called it a “bitter pill to swallow.”

“I think we had lots of opportunity on offense but we couldn’t sink the goals,” said Flanders. “Defense was our problem today and we came out playing very weak defense.”

Fortunately for Santa Monica High School, most of the Vikings squad will return next year.

“It’s been a great season for the guys and we went 8-0 in league,” said Flanders. “We had over 20 wins this season and we look to come back stronger next year.”