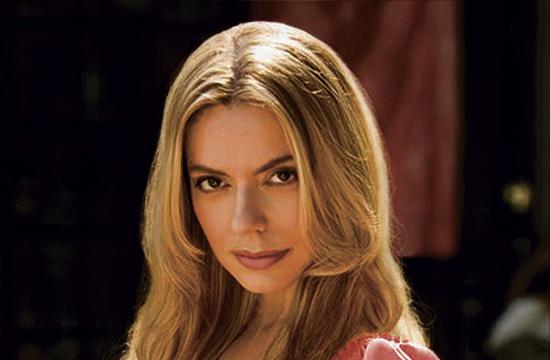 A few years removed from a horrifying ordeal as a slave in Los Angeles, and after studies at UCLA and finally a PhD from the world-renowned Coimbra Univeristy in Portugal, Dr. Marie Paquim, Dr. Marie Paquim, actress, writer, and CEO of Santa Monica-based Utopia Lumiere Films, shows a resilience that can come from near-tragedy.

Her upcoming screenplay “Land of the Free, Except for Me” is based in part on her own experience in captivity, and is a remarkable feat in itself.

First, the FBI had to give her special permission even talk about herself.

“It was a huge document,” Paquim said, of the approximately 50 pages she had to sign.

Her journey from child star in Europe, to captivity in America, and now film producing, could be its own movie.

But for Paquim, her focus is on sharing her story for the purpose of raising awareness on the alarming rise of slavery in the world. Her latest, stark statistics from federal law enforcement: 31 million slaves worldwide, $32 billion in profits, and here in America, the second black market.

“It’s interesting to see people’s faces,” she said. “Like, ‘are you kidding me?’”

But the difference between civil war-era slavery and today’s human trafficking, she said “It’s invisible, without chains.”

“It can be in your neighborhood, down the street at the hair salon, or the spa,” she said. “They’re working for free. But they smile at you, because they’re afraid.”

She said it can happen to everybody, rich or poor, even, as in her case, someone well educated, and “from a good family.”

“I grew up in the film industry, I worked in a show called ‘Croque Vacance,’ similar to ‘Sesame Street,’” she said. “Actually I did my first commercial when I was three. I don’t even remember. But my parents made sure I studied.”

An excellent student, by the age of 19, she received her Master’s degree in theater from Sorbonne University in her native country of France. And it was at that time she met the man who would eventually lure her into captivity.

Young and in love, independent-minded “like any teenager,” she went against her parents wishes to join him in Los Angeles and get married, and pursue a Hollywood dream.

Her nightmare began the night of her honeymoon, when, still wearing her wedding dress, she was threatened at knifepoint to “do whatever I say, or else.”

The man she had fallen in love with had instantly transformed into a psychopathic “monster.”

For the next two and a half years, unknown to even her unsuspecting in-laws, or the surrounding neighbors in the peaceful, upscale Los Angeles suburb, she lived in a “dark room” with no windows, going days without food or water, constantly fearing her next meeting with “the monster” would be her last.

“I used to cry, I used to scream, I could not accept it,” she said. “He used to give me pills. Pills helped me to be dead inside, to run away from reality.”

She said it was a common technique, in fact, used by human traffickers to keep their slaves pacified and in line.

“They do that,” she said. “And you become addicted and they do whatever it takes for the drug. For me it was the sleeping pills. I don’t know how I survived. Many tines I could be close to overdose.”

Later Paquim joined “the invisible” as a waitress in a French restaurant, serving Americans who had no notion as to her slavery.

She was eventually spotted, and later rescued by an undercover FBI agent.

The bulk of that remarkable story, she notes, “is very confidential.”

Grateful for the bravery of the man who rescued her, she later received special, exclusive permission to depict his persona in her script.

Like her, law enforcement had a special interest in having her story told, as a tool to fight against human trafficking.

Paquim, in the dual position as survivor and actress, and a multi-linguist, was recognized as the perfect spokesperson, the perfect face to speak to the world about slavery today.

Getting to that point of wanting to tell her story was monumental.

“I kept this a secret for a very long time,” she said. “I was embarrassed and I didn’t want to explain it. Because I knew the first question: ‘How could that happen to you? You’re so intelligent, so well educated.’ Almost like mocking. I didn’t want to be judged. I was so vulnerable and very angry inside.”

But a few years after her recovery and return to acting, her manager suggested she create her own vehicle.

Teaming with her current writing partner, she decided to tackle the demons of her past, and express her dark side through her art.

“I feel free now as an actress, as a writer, it’s the best way for me to express myself,” she said. “Really, that’s what saved me.”

But the move to the big hat of producer, she admits the task was the biggest challenge of her life.

“It requires more creativity than you think,” she said. “Dealing with different personalities, needing to be strong, determined, fearless.”

And the most difficult aspect?

Recently her film company, Utopia Lumiere Films, partnered with Creative Visions Foundation of Malibu, and she joined other “creative activists” with humanitarian projects represented in a hundred countries, which suits her fine, as her story is intended for the whole world.

“Our goal is global theatrical release,” she said. “From there, we spread the seeds. I want teenagers, children to come see this film, because they are the most vulnerable in our society. I want people to leave the theatres and say, ‘Okay, something has to be done!’ How do we stop human trafficking? I think through imagination, and finding new creative forms. If we think as one global community, we can find solutions. That’s why the movie is being made: to find solutions, ideas to stop the problem. And it will come from us, the community, and the public.”

Paquim welcomes the public to be involved, to donate to the cause, and be a part of the solution.

For more information, visit the company’s page at Creative Visions Foundation: www.creativevisions.org/get-involved/cap/land-of-the-free-except-for-me or the company website at www.utopialumierefilms.com.