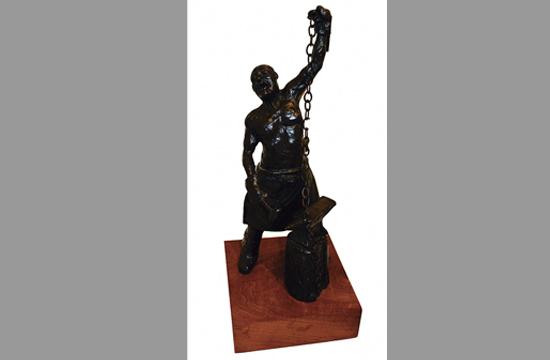 Santa Monica gallery owner Robert Berman knows what it’s like to stand up for a cause. After almost 19 years, he is being forced out of his longtime space at Bergamot Station at 2525 Michigan Avenue due to the Expo Line’s route through Santa Monica. At time of press, a final court date is scheduled for today, Nov. 7 – just weeks before his imminent eviction on Nov. 30.

The family of Paul Conrad, the late artist and three-time Pulitzer Prize-winning political cartoonist, has been fighting a battle of their own with the City of Santa Monica.

Due to years of deterioration from the weather, this “statement of peace” was deemed dangerous to the public in 2011 and a fence was built around it to keep people a safe distance from it.

This controversial sculpture is in need of renovation if it is to continue to exist. The City has left the family and supporters with the job of raising the funds to keep it standing. Although recently receiving landmark status, it’s still in danger of being torn down by the city if sufficient funds are not raised.

Robert Berman has joined forces with the family of Paul Conrad to help raise funds for restoration of the sculpture.

Santa Monica Auctions will hold its final event after almost 19 years. “The Last Goodbuy,” a live public art auction of modern and contemporary art will take place on Nov. 11.

Robert Berman has agreed to auction two Paul Conrad works: a bronze sculpture of Martin Luther King and a hand autographed Conrad cartoon. One hundred percent of the Hammer price will go to the restoration fund.

According to David Conrad, “Since receiving landmark status, Melvyn Green and Associates determined that the sculpture was structurally sound and is compliant with current building standards.”

In addition to receiving help from art supporters such as Robert Berman, the family is currently approaching large donors and art foundations.

Conrad continues, “The city is responsible for preservation of the Chain Reaction since it is a landmark of their possession. But as a gesture of goodwill, the Conrad family and the community is in the process of raising the money to restore the sculpture.”

The Santa Monica Auctions final event takes place at 12 p.m., on Sunday, Nov. 11, 2012. Live-internet bidding and an electronic catalogue will be available to accommodate last-minute consignments.

The auction will be held outside the C2 Gallery at Bergamot Station Arts Center, 2525 Michigan Avenue, Santa Monica. Track 16 will also be having a moving sale on the same day.