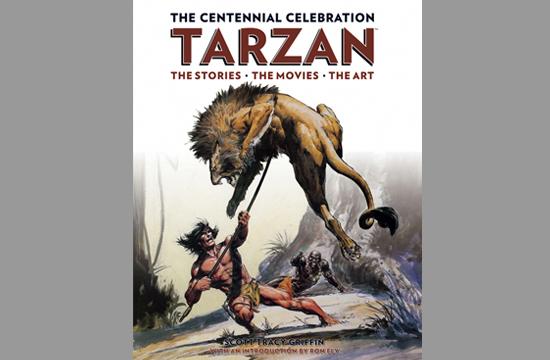 As an internationally-acclaimed Edgar Rice Burroughs expert, Griffin explores the novels and the many varied appearances of Tarzan on stage, screen, and in print.

Each receives a detailed commentary, illustrated with some of the most evocative and beautiful artworks, illustrations and photographs, many rarely seen in print before.

He said the book was the result of a life-long passion for the works of author Edgar Rice Burroughs.

“His novels have always inspired me artistically, and I saw this as an opportunity to commemorate his contribution to our pop culture,” Griffin said. “Authorities such as the renowned Ray Bradbury have lauded Burroughs as the most influential writer of the 20th century. Without Burroughs, we might not have had Flash Gordon, Buck Rogers, Superman, Star Wars, Avatar, and the multitude of pop culture franchises his work inspired and influenced.”

Griffin said he pitched the project to Edgar Rice Burroughs, Inc., the family-owned business that controls the trademark from their Tarzana, CA offices.

He said they approved his proposal, and contracted him to compose the franchise’s history.

He said he pleased when Titan Books signed on as the publisher.

“My years as a fan and follower of Burroughs contributed immeasurably to the 10-month research phase, followed by nearly six months devoted to the writing,” he said.

He said he learned many interesting things during the course of his research.

“Re-reading all of Burroughs’ novels, nearly 80 books, in the order he wrote them while also studying the definitive Burroughs biography, Irwin Porges’ “Edgar Rice Burroughs: The Man Who Created Tarzan” was enlightening,” he said. “It was intriguing to trace Burroughs’ artistic process from his early, idealistic days when he wrote flowery prose in ‘A Princess of Mars and Tarzan of the Apes’ through the last days of the pulp magazines, when his writing became terse and gritty in short stories like ‘Pirate Blood’ and ‘Elmer.’ His work reflected the changing times, from the birth of the automobile, airplane, radio, and motion picture industry, through the Jet Age of post-World War II America.”

Griffin said he tried to write the definitive illustrated history of the Tarzan character, which has something to offer to a wide range of pop-culture buffs.

“Tarzan conquered every medium – print, radio, film, television, stage, mass merchandising and web – and all this is recorded in ‘Tarzan: The Centennial Celebration,’” he said. “I believe the art, especially the full-page illustrations, some of which were previously unpublished, will make this a highly sought collectible that will appreciate in value.”

Griffin said he discovered “Tarzan of the Apes” at age nine and has been an avid reader of Burroughs throughout his life.

“His work inspired me to write, and my creative bent has been to explore Burroughs’ fictional worlds and their adaptations in various media,” he said. “I began my professional career by writing for film and television periodicals and interviewing former Tarzan film stars like Denny Miller and the late Herman Brix and Vanessa Brown. I find the history of the film industry, and those who have contributed to it, fascinating.”

Griffin said he has lived in Santa Monica’s Wilmont neighborhood for most of his 24 years in California.

“I like the small-town atmosphere, beach living, climate, healthy tourist economy – the only downside is over-development,” he said. “I hope our town doesn’t lose its character due to the rapidly increasing overcrowding and congestion.”

Griffin’s debut Santa Monica book-signing event will be in conjunction with a benefit screening of Walt Disney’s “John Carter,” based on Burroughs’ first published novel, at the Aero Theater on Saturday, Dec. 1, from noon to 5 p.m.