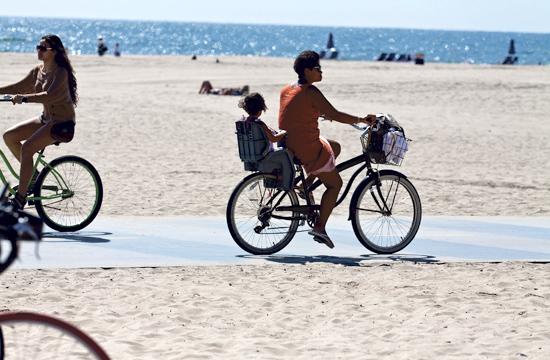 Improved signage and striping are in store for the Beach Bike Path thanks to a consent calendar item that was unanimously approved last Tuesday by the City Council. The anticipated improvements are expected to cost upwards of $360,000; California-based Sterndahl Enterprises, Inc. was awarded the contract.

Sterndahl Enterprises earned the contract for $362,481 after the previous vendor, Excel Paving, failed to come to terms with City Hall on the project.

The signage and striping project was originally supposed to be completed in conjunction with the resurfacing of Beach Parking Lot 4S. In July, Excel Paving completed the parking resurfacing. However, according to City staff, “the striping and signage improvements on the Beach Bike Path were not completed by Excel Paving because … a reasonable price for work within the project budget” could not be negotiated. Accordingly, Excel Paving “decided to bid the project separately.”

The approved contract amount includes a 10 percent contingency for unforeseen increases in budget. According to City staff, the engineer’s estimate for the signage and striping project was $270,000.

“This project will install striping and signing on the Beach Bike Path from north City limit to south City limit, a distance of approximately three miles,” City staff stated in a report. “The purpose of the signs and striping is to delineate the right of way and the shared use of the path between pedestrians and bicyclists… (and) will also enhance safety at pedestrian crosswalks where there is a potential for collisions between pedestrians and bicyclists.”

According to City staff, Excel Paving, who was originally awarded the contract, requested an additional markup of five percent and “asked the City to hold the contractor harmless during construction.”

“Staff did not believe either demand was in the best interest of the City and decided to bid the striping and signage scope of the project separately in an effort to receive competitive prices, thereby saving the general contractor’s mark-up and exposing the City to undue liability,” the City staff report stated.

City staff added Unispec, the lowest bidder, was “deemed non-responsive for failing to meet the licensing requirements … and for not having any experience with the material that will be used on this project.”