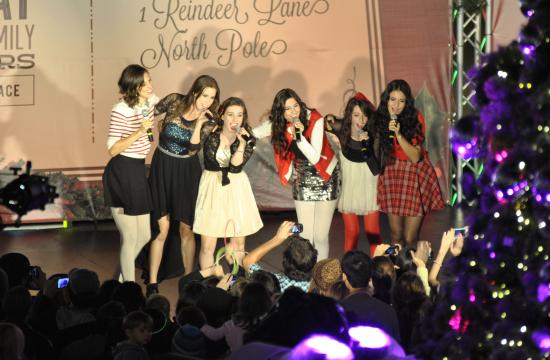 Just like every holiday season, residents and tourists alike surrounded the center stage to watch the lighting of the 54-foot tree on Nov. 17.

The tree lighting ceremony took place at about 6 p.m. after Santa Claus headed his way to the mall escorted by officials along the Third Street Promenade.

First, Mrs. Claus held up a flashcard of a drawing that represented a Christmas carol to which the audience reacted by shouting out the name of the carol, which was proceeded by the winter carolers singing popular lyrics of the carol.

Throughout the latter half of her performance, Boskovich welcomed onstage one of the Fire ‘n Ice acrobats. The acrobat performed onstage as she kept singing lively holiday songs.

“I love this time of year,” she said. “I hope you guys enjoy this wonderful time of year with your friends and family.”

Soon after, both Fire ‘n Ice acrobats showcased their talent as Santa Claus was closer to arriving.

The kids at the mall cheered as Santa Claus walked onstage.

Accompanied by Mrs. Claus, both instructed the guests to make a wish and throw the wishes into the air to light up the giant-sized tree.

With 42,000 lights on the tree, the mall came to life as the holiday tree and the surrounding palm trees lit up.

To close the ceremony, YouTube sensation, the Cimorelli group, composed of six singing sisters, sung several other songs including an a cappella act.

Organizer Lauren Fong said she enjoyed putting together the event for the second time.

“I hope everyone had fun,” Fong said.

The Winterlit season will include more fun and interactive events as the year slowly comes to an end.