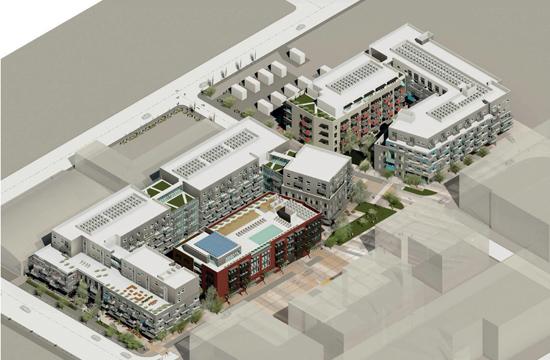 One of Santa Monica’s oldest communities, Village Trailer Park, will soon be bulldozed to make way for a 377-unit mixed-use housing development called “East Village.” In all, 99 rent-controlled units will be lost and in its place will be a development expected to feature 161 apartments and 216 condominiums at 2930 Colorado Avenue.

The Santa Monica City Council finally green-lighted the mixed-use housing project helmed by developer Marc Luzzatto after two days of deliberation and discussion. A 4 to 2 vote was reached Wednesday to approve the project, more than 24 hours after the city clerk called the agenda item inside Council Chambers.

With an announced 70-plus speakers addressing five council members during public input Tuesday evening, more extensive deliberations were held Wednesday on the dais with the addition of another council member.

Both Council members Terry O’Day and Bobby Shriver were not present Tuesday night, but O’Day was on the dais Wednesday when the final vote was cast.

The two days of deliberation and discussion capped off a six-year battle that drew the ire of those who would either be displaced by the elimination of Village Trailer Park or adversely affected by potential impacts of a new development such as increased traffic.

Wednesday’s vote came after Luzzatto made some concessions to his project. Prior to the council meeting, Luzzatto had agreed to reduce the overall size of the project by eight percent; also, the new development would feature 14 percent fewer units.

The approved development will retain 10 of the original trailer spaces (closure of 99 spaces).

McKeown cast his “no” vote to reflect his concern that several dozen residents of Village Trailer Park would be displaced in favor of a development that was not consistent with the Land Use and Circulation Element (LUCE). There were also questions of soil quality and land value.

The environmental concern was raised Wednesday night after McKeown received a letter from Peter McNaughton who alleged the land where Village Trailer Park currently sits and the proposed multi-use development will be built, is located in a “High Risk Liquefaction” area.

Davis advocated holding off on a decision until more information could be made available to the council.

When the agenda item was first introduced early Tuesday evening, Davis introduced a motion to postpone a decision on the fate of Village Trailer Park until at least February, coincidentally after the new council would be seated. However, her motion failed. The new council will be sworn in next month on Dec. 11.

Luzzatto himself pleaded with the council to come to a decision this week, lest his business partners decide the six-year wait was long enough and any future delay would determine the development no longer be a viable investment.

“We made significant modifications,” Luzzatto told council members. “We have a lot of people who live there who call me frequently and they are stressed. They want a decision. They need a decision.”

Prior to the two-day meeting, Diana Gordon of the Santa Monica Coalition for a Livable City (SMCLC) sent a letter to council members urging them to delay deciding upon the fate of Village Trailer Park and allow the new council to consider the issue in 2013.

She said the Development Agreement does not honor the spirit of the LUCE.

“This project is expected to generate over 2,000 net new daily car trips in an already highly congested area,” she wrote, adding there is “no emergency here that would support having this issue heard now.”

Both Gordon and Santa Monica resident Zina Josephs – who also sent a letter to council members prior to the meeting – urged the council to put off considering the future of Village Trailer Park until the Bergamot Area Plan is adopted.