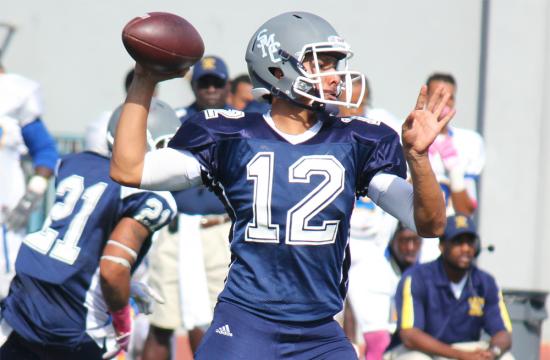 The Corsairs boast a 9-1 regular season record going undefeated 7-0 in the Pacific Conference in a season that will go down as one of the best in school history.

Santa Monica Head Coach Gifford Lindheim believes in a philosophy in which the Corsairs have “a goal to reach their potential individually and collectively” each and every year.

“Winning is a residual outcome of that philosophy,” said Lindheim. “The past two seasons have resulted in championships. I’m happy for the guys to be able to enjoy such positive outcomes from their talent, hard work, and dedication.”

Santa Monica College quarterback Alfonso Medina was 14-28 for 288 yards throwing three touchdowns and one interception against the Marauders.

Medina leads the Pacific Conference with 238.2 yards per game and 28 passing touchdowns netting 2382 total yards for the season.

“We have had a lot of confidence in ourselves and every week we have relied on different parts on the team to make it a complete team effort,” said Medina.

“It’s been an amazing year and all of us have come a long way since spring ball,” said Gordon. “I feel the chemistry we have together and as a team, we’ve been able to utilize to dominate other teams every Saturday.

Corsairs rusher Myles Johnson added 83 yards on the ground on 27 carries against the Marauders.

Johnson leads rushers in the Pacific Conference with nine touchdowns and an average of 101.7 yards a game with 1017 total yards for the season.

“I’m very proud of the entire SMC family from the athletic department to the coaching staff and my teammates on both sides of the ball,” said Johnson. “It’s been a honor to go to war each game with this team.”

Next game for the Corsairs is away against Southwestern College Saturday, Nov. 17 in the American Division Championship Bowl at Olympian High School in Chula Vista at 6 p.m.