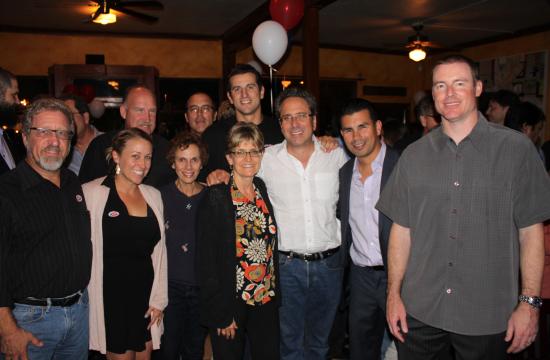 Many pundits predicted the race for the White House would take weeks to determine the winner. Even though President Barack Obama disappointed those pundits with most major outlets calling his reelection moments after polls across California closed, a race much closer to Santa Monica may indeed fit the bill of a drawn out nail biter: the 50th Assembly District.

According to the California Secretary of State’s website for election results, Bloom edged Butler by 218 votes. With 100 percent of precincts reporting, Bloom captured 69,280 votes (50.1 percent), compared to 69,062 votes (49.9 percent) for Butler at time of press.

However, neither camp was ready to concede or declare victory.

While Bloom was not available to go on the record, his campaign manager, Brian Ross Adams, issued a cautious statement on Bloom’s website, saying it may be a while before a winner is determined.

“He finished the night ahead by 218 votes, but the process is not yet complete,” Adams said. “Votes will be counted for the next two weeks and he, along with many others, will follow the count closely and optimistically.”

Bloom is currently completing his third term as Santa Monica’s mayor. Elected to the council in 1999, Bloom hopes the current vote count will hold up so he could make the jump to Sacramento and represent a larger region.

During his 13-year tenure on the dais, Bloom has promoted policies affecting sustainability, the environment, public transit, affordable housing, and various health issues such the City’s recent smoking ban.

Butler, the 48-year-old incumbent who is wrapping up her term as the Assembly member of the old 53rd District in Sacramento, did not return requests for interview by time of press.

In addition to the Assembly race, Congressman Henry Waxman retained his seat in Washington, D.C., defeating the independent Bill Bloomfield by an estimated 17,000 votes, according to the Secretary of State’s office.

Waxman said he wanted to thank the community for the wonderful support.

“I will do all I can to honor the extraordinary trust and confidence our district has placed in me by working closely with President Obama to solve the urgent challenges facing our nation,” Waxman said.