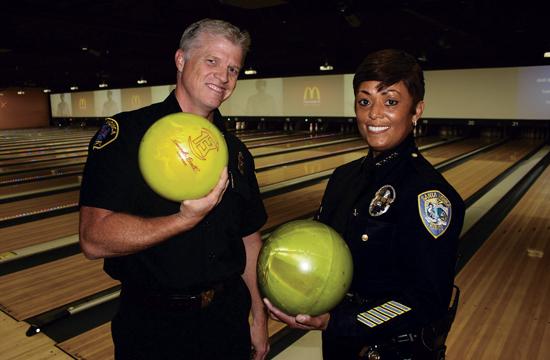 The annual event, which brings together more than 700 bowlers representing various businesses, social service agencies, and local government, will return on Feb. 1, 2013.

Chief Jackman said his record in the “Chief’s Challenge” was one win and one loss to former Police Chief Tim Jackman whom he beat last year with a score of 146.

“I believe after I beat him by 22 pins he decided to retire,” Ferguson said. “He didn’t feel like he had it in him to give it another shot. The police department decided to recruit some new talent.”

When asked what he thought of his new opponent, Ferguson said he heard she was a talented bowler.

“She says she can bowl a 250, I can’t,” he said. “I don’t believe there’s any measure of practice that I can do to improve my score, so I have to psych her out.”

Ferguson said he planned to dazzle her with a new bowling outfit come February.

“It’s a surprise,” he said. “Every year it’s different. I wore my kilt and that psyched Tim Jackman out last year. The year before I had knee socks, but that didn’t do the trick, so I had to take it up a notch last year. I’m not sure what I’m going to break out of the closet, but I have a lot of options.”

He said he was feeling confident, adding he didn’t want to let his firefighters down.

“We’ll see how she handles the pressure of the big event,” he said. “The Fire Department runs in packs with a minimum of four on every team everywhere we go. Cops are used to running in singles. I’ve spent a lot of time with this trophy and I don’t think it’s going to go anywhere.”

She said she bowled at a previous SuperBowl-A-Thon when she was a SMPD Captain before she left the department in 2007 to take on the role of Inglewood Police Chief.

“I think it’s a wonderful event and opportunity to bring the community together with public safety in a unified message,” Seabrooks said. “I think the Fire Chief has a lot to worry about, I have a secret end game.”

She said Chief Ferguson should be nervous about retaining the trophy.

She said she bowls “often enough to beat the Fire Chief” and “doesn’t need to practice” in the lead-up to the big day to beat him.

When asked if she felt any pressure from her department, she joked, “Of course not, the Chief never feels pressure. That’s a Fire Department problem.”

“I understand he wore a skirt last year, excuse me, a kilt,” she joked. “All I’m going to say is that he should keep his legs crossed when he’s wearing a skirt.”

The upcoming SuperBowl-A-Thon already has top sponsors, including Kiwanis Club of Santa Monica and CapitalSource Bank – the full sponsor list will be published closer to February.

For more than 25 years, WSHC, a project of Community Partners, has addressed the needs of the homeless and low income population in the western part of Los Angeles County by coordinating programs, such as food and shelter, job counseling and health services, as well as providing education and advocacy.

The WSHC is an alliance of more than 30 organizations representing local human service, government agencies and faith communities committed to ending hunger and homelessness on the Westside.