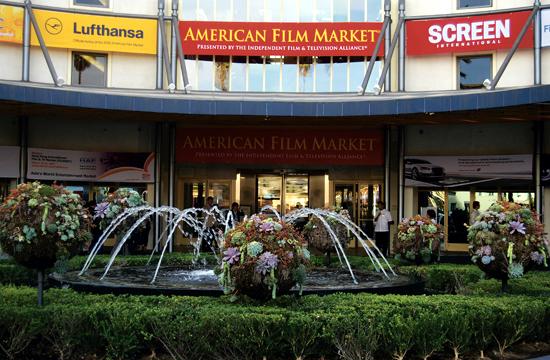 Loews Santa Monica Beach Hotel welcomed Halloween with no vacancies, but there were no trick-or-treaters filling the bars, lounges, and rooms. Instead, the beachfront hotel was filled with those involved with wearing costumes not for candy, but to succeed in the business of cinema and filmmaking as the American Film Market (AFM) kicked off Wednesday at the hotel.

The weeklong event is considered a premiere destination for film buyers and industry professionals.

According to organizers, attendees will descend upon Santa Monica between now and Nov. 7 from more than 70 countries and watch screenings of 442 motion pictures.

This year’s AFM also boasts 82 world premieres and 327 market premieres at venues across Santa Monica. Organizers predict as many as 8,000 film professionals will attend this year’s AFM.

“AFM is a marketplace for all – there is no gatekeeper,” said Jonathan Wolf, AFM’s managing director. “We are seeing a shift in the way sub distributors acquire film as they steadily rely less on local distributors and more on direct acquisitions. We also expect a significant increase in buyers from China.”

The opening day of AFM featured many filmmakers and industry executives participating in meetings all day long to make pitches and gauge the pulse of the independent film marketplace. Indeed, AFM is hailed as an international destination for independent filmmakers.

Among the independent film friendly distributors and studios represented at AFM were Focus Pictures, Fortissimo Pictures, Lionsgate, and StudioCanal.

Another highlight of AFM was the presentation of “Hong Kong Day” for the third consecutive year.

Jointly presented by AFM and the Hong Kong Trade Development Council (HKTDC), the daylong event took place Thursday. The festivities boasted the benefits of filming and producing in Hong Kong. Throughout the day, there were seminars, premiere film screenings, and a cocktail reception.

“Hong Kong’s film industry has the experience, the regulatory blessing and the all-important contacts to help U.S. filmmakers make the most of the emerging Mainland China opportunities,” Raymond Yip, an assistant executive director at HKTDC, said.

According to organizers, making their respective AFM debuts as an exhibitor were nation-sponsored organizations from Australia, Dominican Republic, Panama, Russia, and Thailand.