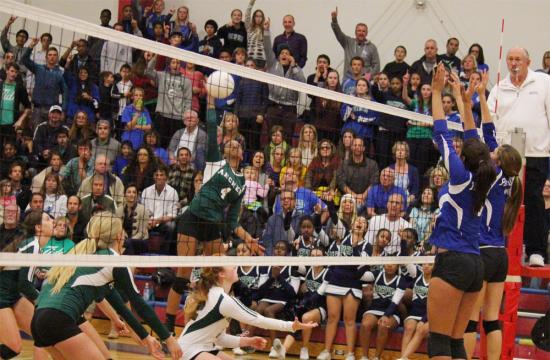 Pacifica Christian knocked out Archer winning the CIF quarter finals match between the rivals with the Seawolves battling through the Panthers to win 3-1 after a shocking first set loss before a packed gym of dedicated Seawolves and Panthers fans at Crossroads High School Saturday night.

With the win, the Seawolves continue their journey as the number one seed into the semifinals, while the Cinderella story for the Panthers came to an abrupt end, but not before one last final epic battle.

Pacifica Christian Volleyball Head Coach Billy Allen thought that the Panthers “showed a lot of heart coming back to win that first game.”

“It’s always a battle,” said Allen. “I felt like the girls played great. We just had to weather the storm in the first two games and then just keep hitting them.”

Against all odds, it seemed as if the Panthers magically won the first set 26-24 with Archer libero Lindsey Levesque digging potential kills whacked by Seawolves stellar outside hitters Grace Minchin and Gen Hook, and middle blocker Amber Berck.

With that confidence and momentum, the Panthers narrowly missed beating a rarely shaken Pacifica Christian team in the second set 26-24 with Levesque performing more of her acrobatic diving digs to bail Archer out and keep the Panthers strong in the game.

But the Seawolves, who have already beat the Panthers twice this season, quickly regained their composure and shook off the shock of losing a set.

The Seawolves went on to play solid volleyball the rest of the game adding kills and blocks all over the court to frustrate Archer’s offensive and defensive attack until Archer submitted in the final two sets 25-15 and 25-11.

Archer Volleyball Head Coach Jonathan Lotz thought that if the Panthers could have only kept the momentum going from set one and then coming from behind to almost win set two, the results of the game might have turned out differently.

“We came in withe a game plan where we were going to switch things up on them almost every play,” said Lotz. “And with these different colors and defensive schemes it was working, but then a couple balls didn’t go our way and we lost that second set even though we had the set point. I think that really took a lot of steam out of us.”

Archer’s Fall 2012 season journey ends in the quarter finals with the loss to Pacifica Christian.

Next game for the Pacifica Christian Seawolves is away against St. Anthony Tuesday, Nov. 13 at 5 p.m.