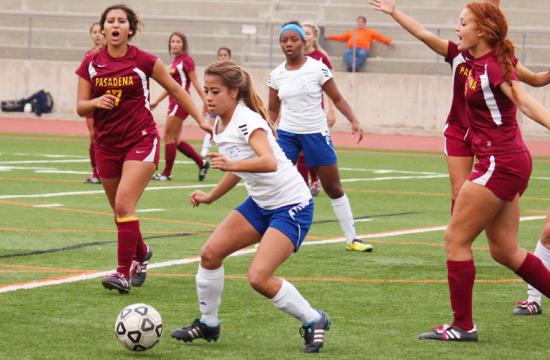 Santa Monica College Women’s Head Soccer Coach Aaron Benditson thought that the Corsairs were a “team that was playing for their life,” against the Lancers.

“It was a game against two conflicting teams,” said Benditson. “Our team is more technical and our tried to keep the ball on the ground and Pasadena is more direct and used their size, power, and physicality against us.”

Santa Monica College forward Daysi Serrano scored the first goal near the end of the first half against Pasadena City College goalie Tatiana Sanchez to put the score at 1-0.

In the second half, the Lancers struck back with midfielder Cassandra Orozco scoring a goal after breaking through the defense of the Corsairs on a pass from defender Hallie White.

Things heated up half way through the second half between Santa Monica College forward Tylor Fields and defender White both of whom were issued yellow cards.

Official time for the game ended with the score tied at 1-1 sending the game into a 30 minute overtime.

Fields scored a goal for Santa Monica College in overtime to put the game at 2-1 with defender Briana Mackey and goalie Cindy Godina anchoring the defense of the Corsairs to prevent the Lancers from scoring.

A scare for the Corsairs came with a minute left to play near the end of the game when the Lancers offense beat Godina and kicked the ball towards the goal, but Serrano caught the ball in the air with her foot to give the Corsairs the win.

“I’m in shock,” said Serrano. “I usually don’t get a lot of playing time because this is my first year. Today I felt like I had so much on my shoulders. I had to give it my all and leave everything on the field.”

With the win, the Corsairs advance to round two of the playoffs away against San Antonio College (19-0-1) Saturday at 2 p.m.