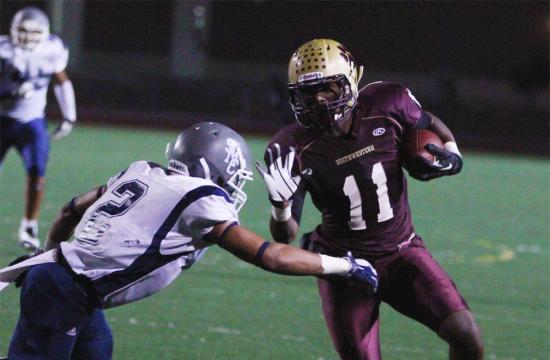 Santa Monica College (9-2) lost the American Championship Bowl against a highly disciplined Southwestern (10-1) team 45-31 in a game where two champions faced off against one another and battled Saturday night at Olympian High School in Chula Vista.

Santa Monica College Head Football Coach Gifford Lindheim was proud of the the way the Corsairs handled themselves against an “excellent” Southwestern team.

“We had some opportunities tonight, but just weren’t able to come out on top,” said Lindheim. “The two year run our sophomores have put together is very impressive. That’s thirteen straight conference wins, back to back championships, and two straight Bowl appearances.”

The game was tight at 31-29 in the fourth quarter after Corsairs tight end Dominique Bierria had caught a 13-yard touchdown toss from quarterback Alfonso Medina with 12:21 to play.

Medina then went to the air for a two-point conversion finding Corsairs wide receiver Reggie Mitchell wide open in the end zone to tie the game 31-31.

On Southwestern’s next drive, the Jaguar offense drove down the field with running back Charles Westbrook scoring on a four-yard rush to make the game 38-31 with 9:45 to play.

On the Corsairs next drive, Medina started the drive by connecting with Mitchell on a 21-yard pass, but Jaguar corner back David Clark forced a fumble.

Southwestern took advantage of the excellent field position and quarterback Frank Foster went to work connecting with wide receiver Kene Anigbogu who broke into the Corsairs secondary and gained 25 yards before being tackled by Corsairs defensive back Rico Wright.

The Corsairs defense held strong for the next two plays but on third and ten, Foster connected with wide receiver Bryant Mitchell in the end zone for a 21-yard touchdown to make the game 45-31 with 7:15 left to play.

After a strong kickoff return by the Corsairs Ralph Gordon II that was compounded by a face mask penalty against Southwestern, Medina and the Corsairs found themselves in good position to strike.

But a deep pass from Medina to wide receiver Carzel Vickers was deflected by Clark who battled Vickers for position on the Medina ball.

On fourth and five, Medina’s next pass to Gordon fell incomplete turning the ball over to Southwestern.

Southwestern Football Head Coach Ed Carberry thought his team could have played better football but was happy his team pulled off the win.

“As bad as we played, the game was close,” said Carberry. “I just kept telling my team that if we stopped fumbling and stopped dropping passes, we could get back in it.”