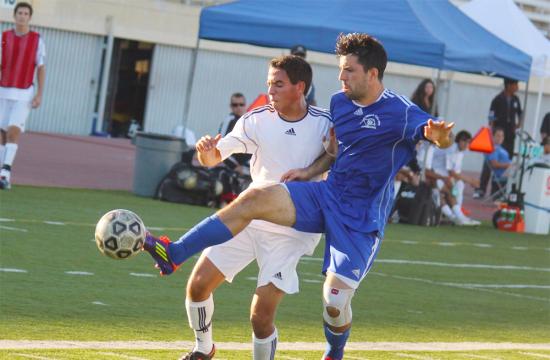 Only the top fourteen teams in the Regional South standings will advance to the playoffs.

With the win over Citrus College, the Corsairs now stand a good chance of moving up from fifteenth to fourteenth place depending on how the other Southern Californian teams do this week.

“This is the last week and we need to leave everything out there,” Pierce said. “I thought we had a great defensive performance and we limited the other teams chances.”

Santa Monica College jumped on top early in the 11th minute when Canale scored off a pass from midfielder Humberto Villegas to give the Corsairs a 1-0 lead.

Canale delivered again for Santa Monica College in the 19th minute when Midfielder Luis Sanchez passed the ball out front and Canale was there to finish it off to give the Corsairs a 2-0 advantage going into half-time.

The Corsairs had a slight scare in the game during the 80th minute when Citrus College’s Pedro Felix found the back of the net and put the Fighting Owls back in the game 2-1.

Citrus College was given their last opportunity to score when the Corsairs fouled forward Diego Mercado with two minutes left to play in the game, but Santa Monica College stepped up its defense and the Corsairs won 2-1.

Pierce was excited to come away with the win and felt the Corsairs finished strong by stepping up defensively and not giving up more then one goal.

“I thought we played well up until the end when we lost our focus and gave up a goal,” Pierce said. “We were quickly able to react defensively by keeping the other team out.”

Pierce feels Canale is a big factor for the Corsairs offense and the team struggles when he is not in competition.

“We have only been shut out three times in 19 games and two of them were when Alessandro was not in the game,” Pierce said. “He is an important piece of our offense and without him it’s a little bit of a struggle.”

Canale served a two-game suspension last week against Glendale and LA Mission Colleges, and with his absence the Corsairs dropped both games being held to two shut outs.

Canale returned against Santa Barbara last week and scored the tying goal in the last minute of play.

Canale is currently the second leading scorer in the state with 22 goals and 11 assists.

Santa Monica College has one more game left to play in the season, and the Corsairs need to win in order to increase their chances of qualifying for the playoffs.

The Corsairs play their last game of the season away against Canyons Friday, Nov. 9 at 3 p.m.