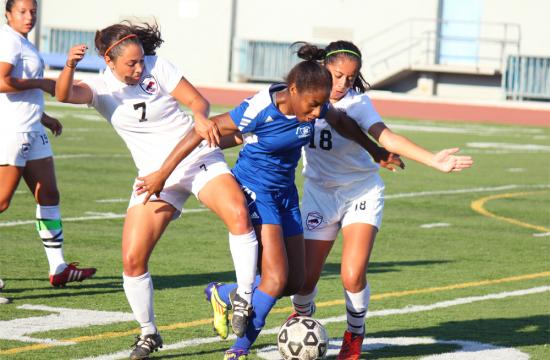 Santa Monica College (8-3-6) soccer forward Tylor Fields scored a powerful left footer to help the Lady Corsairs come from behind to tie the game with a 1-1 draw against the LA Pierce College Brahmas (11-4-2) in a Western Conference game on Tuesday.

“Us getting scored on or taking a goal sometimes never seems to rattle this group,” Benditson said. “We always have confidence in ourselves and our playing ability that we could get back. We just made a quick switch into our formation and from there we got a great opportunity and it was a great goal that was scored.”

Both teams played an even match game in the first half, but the game turned around in the 69th minute when Brahmas midfielder Robinette Ramirez fouled Corsairs forward Meg Pierce and was given a yellow card for foul play.

Just six minutes later, Pierce answered back with a foul from behind on Brahmas midfielder Edith Dominguez and was handed a yellow card.

The game intensified even more when both teams picked up their offense.

Brahmas midfielder Emily Streb was the first to respond as she put Pierce up with a header just inside the box in the 78th minute.

The Corsairs quickly retaliated in the 80th minute when Fields’ shot beat two defenders and her left footed goal tied the game 1-1.

Goalkeeper Cindy Godina came up with two big saves in the last minutes of play as they held the Brahmas offense and finished the game with a 1-1 draw.

The draw helped the Lady Corsairs maintain the third position in the Western State Conference ahead of LA Pierce.

Benditson believes that his team’s commitment to finish the game off has allowed his them to compete with the top teams in the conference.

“The girls are always fighting until the end,” Benditson said. “They don’t ever get down on themselves and they are always very positive and optimistic with each other. You can see that sort of energy when they play.”

With three more games left to play in the season, the Lady Corsairs will continue to fight for a top spot in the conference.

Next game for the Corsairs is away at Bakersfield today at 4 p.m.