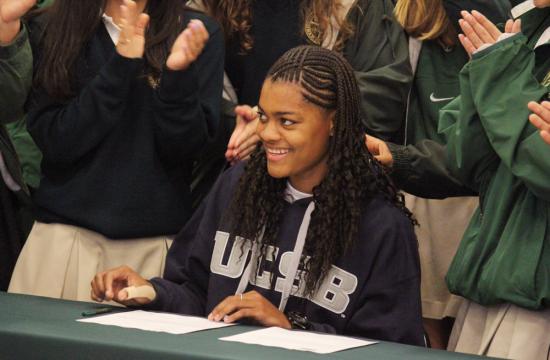 Maragnes is a 6-2 forward from Guadalupe, a French island in the Caribbean near Puerto Rico and Jamaica.

“I chose UC Santa Barbara because it has a great campus and is really good in academics and sports,” said Maragnes.

Maragnes, who has played basketball since she was ten, is currently a senior at St. Monica’s and came to the United States in 2009 for a youth basketball camp hosted by the Boston Celtics before choosing to attend Serra High School in Gardena, Ca.

But she decided to switch schools and play at St. Monica High School starting her junior year so she could “get more playing time.”

Mariners Girls Basketball Head Coach John Skinner was proud of the accomplishments that Maragnes has displayed on the basketball court for St.Monica.

“Since the last year she has come here, she has worked incredibly hard,” said Skinner. “The two things I am proud of her besides her athletic achievement are her leadership skills and her discipline.”

Maragnes was named to the First Team All-Camino Real League as a junior and helped lead the Mariners to their first league championship in ten years.

Maragnes was also named to the All-CIF Division 4A second team averaging 11 points and ten rebounds a game with a playoff run averaging 20 points and 11 rebounds per game.

Maragnes set a new school record as a junior in her 2011-2012 basketball season for blocks with 68.

The Mariners are currently 3-1 at the beginning of the 2012-2013 girls basketball season.