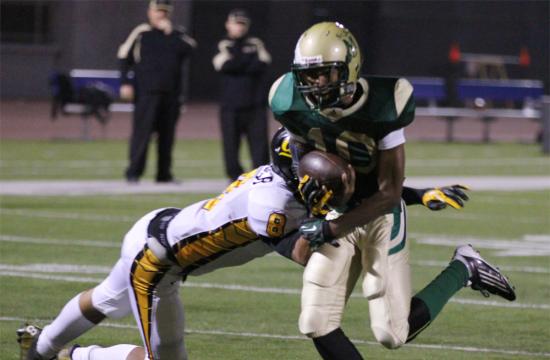 In a football game that came down to the last minutes of play in the fourth quarter, the St. Monica Mariners (8-4) defied the odds and won their quarterfinals game at home Friday night against Boron (10-2) defeating the Desert Mountain League champions 19-16.

An ecstatic St. Monica Head Football Coach Adam Guerra led his jubilant team to victory in a game where Guerra knew his team had to come up with a great defensive game plan in order to win.

“We executed our defensive game plan at a high level,” said Guerra. “In the last two weeks we talked about opportunity, maturity, confidence, intensity, and physicality. We knew if we brought those five things in practice, and to both games, that would put us in the best position to win.”

The Mariners defense held strong in the first half and kept the vaunted offense of the Bobcats out of the end zone with Guerra making the decision to allow kicker Sammy Saldibar to kick a field goal on fourth and goal in the first quarter rather then attempt a two-yard touchdown.

The safe bet put the Mariners up 3-0.

The Bobcats drove the length of the field in the second quarter but lineman Angel Galdamez stepped up deep in the red zone and picked off Fink to prevent the touchdown and keep the momentum with the Mariners as they headed into the locker room at the end of the first half.

“Everything was going super slow and I thought to myself, I have to run it back,” said Galdamez. “It was a great feeling.”

With the momentum on their side going into the second half, Mariners running back Kevin Holubowski made his presence known outracing the Bobcats defense for an apparent 72-yard touchdown, but it was called back due to a holding penalty.

After some heroic efforts by quarterback Luke Cain and all-purpose back Melvin Wilson to secure a first down, Holubowski was off to the races again and scored on a 59-yard rushing touchdown to put the Mariners up 9-0.

But Boron wasn’t out yet and the Bobcats struck back driving the length of the field with running back Domingo Gutierrez scoring a four-yard touchdown and quarterback Austyn Fink connecting with wide receiver D.J. Payne for the two point conversion to make the game 9-8.

An onside kick by the Bobcats failed and the Mariners took over with good field position.

After a few plays, Saldibar tacked a 27-yard field goal on fourth and seven to make the game 12-8.

On the ensuing kickoff, Saldibar booted the ball deep into the territory of the Bobcats.

After a few plays that looked like the Bobcats might come up with another lengthy drive, St. Monica’s corner back David Araujo intercepted Fink’s pass which set up a 2-yard touchdown dive by Cain to put the Mariners up 19-8.

“I kept my head in the game and took it home,” said Cain.

Both teams fought for yardage in the ensuing drives with the Bobcats coming out on top when Fink connected with wide receiver Austin Russell for a 30-yard aerial touchdown and then with wide receiver Drake Job for the two point conversion to make the game 19-16.

With five minutes was left to go in the game, the Mariners ran out the clock to hold on for the win.

“We came out and we knew it was going to be a tough game,” said Wilson. “We knew we had to play physical. Together as a team we came together in the same mind state and that’s how we put it through.”

Aruajo, who had two interceptions in the game against Boron, credited the success of the Mariners secondary against the Bobcats passing game to Guerra and his assistant coaches.

“They were ranked a lot higher then us but our coach prepared us,” said Aruajo. “Our coaches told us to press up on them and not to let their receivers breathe.”

With the win, the Mariners advance to the CIF semi-finals against Rio Hondo Prep at Santa Monica College on Friday, Nov. 23 at 7 p.m.