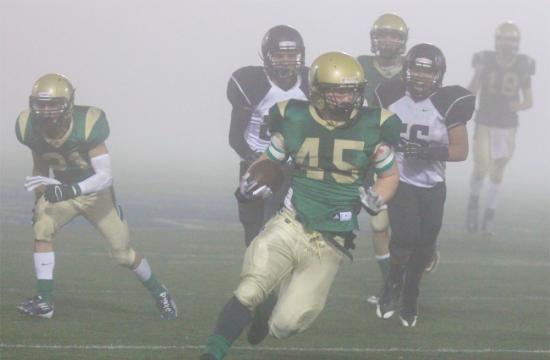 With a little over two minutes left to go in the first half, St. Monica (8-5) was down 14-0 in the CIF Semi-Finals against Rio Hondo Prep (11-1) and Mariners defensive lineman Erik Reese had just recovered a fumble by Kares running back Nate Tayco.

It was Tayco’s second forced fumble in less than three minutes, and the momentum of the foggy football game seemed to be shifting in favor of the Mariners.

The Mariners field position put them at the 47-yard line of the Kares and Mariners running back Kevin Holubowski started smashing through the defense of Rio Hondo Prep picking up large chunks of yardage while driving down to the 21-yard line.

St. Monica looked to change its fortunes and score a touchdown before the end of the first half with Mariners quarterback Luke Cain going to the air in an attempt to connect with wide-receiver Lukas Dretska for a touchdown.

But Cain was picked off at the 11-yard line by Kares defensive back Jake Holguin, who ran the ball to the 35-yard line before being tackled by Holubowski.

“I was supposed to blitz on the play but I saw the quarterback dropping back so I tried to sneak off and that was when I saw the window,” said Holguin. “When I jumped, I stuck my hand out and the tip of the ball just happened to be there so I popped it up and just tried to run.”

Mariners Head Coach Adam Guerra thought that the “good play” was unfortunate for the Mariners and the momentum seemed to swing back to Rio Hondo Prep.

“Kevin had made a great move and I thought they were going to adjust back from a blocking standpoint,” said Guerra. “We had worked on slants all week long and the route was there. Holguin had been blitzing and he dropped and there was no way Luke could see him. It was just one of those good plays.”

From there the offense of Rio Hondo Prep, led by Tayco, pounded their way through the Mariners defense until Holguin caught a 16-yard touchdown off of a slant across the middle from Kares quarterback Colby Rivera to beat Mariners corner back Melvin Wilson and make the game 21-0.

Rio Hondo Prep held on to win the game 42-14 knocking St. Monica out of the CIF Southern Section playoffs and the Kares will advance to the CIF finals.

Regardless of the loss, Guerra thought that Mariners had played a great season of football.

“We believe in a lot of basic principles and hard work is absolutely one of them,” said Guerra. “We lost some games back in the season that we shouldn’t have lost but we didn’t change anything and we kept going to practice everyday. Our formula wasn’t wrong, we just needed to tweak it a little bit and everyone bought in and worked hard.”