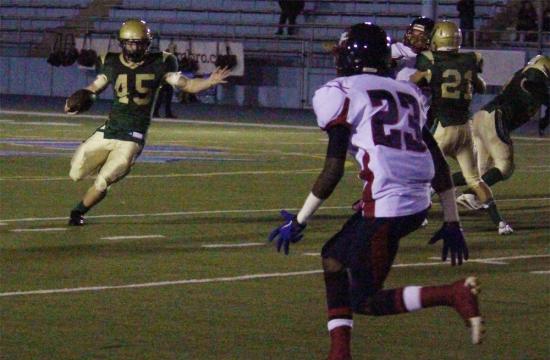 With a cold front setting in Thursday night and St. Monica’s (7-4) playoff aspirations looking dim, the Mariners went into the football game against a Bellarmine-Jefferson (4-6) with high hopes. Bellarmine-Jefferson looked good on paper after coming away with a commanding 55-28 victory against St. Anthony (6-3) last Saturday.

St. Monica had lost to St. Anthony two weeks before 16-13, and the Mariners had just weathered a disheartening 48-0 loss against the powerful Salesian (8-1) football team.

But as the lights were dimming for St. Monica as they entered what could have been their final game of the season, the Mariners reached down and were determined not to quit pounding the against Bellarmine-Jefferson Guards until they submitted 34-14 on the Palisades Charter High School football field Thursday.

With the win, the Mariners are now ranked second in the Santa Fe League with a league record of 2-2 and stand an excellent shot at going to the playoffs.

St. Monica’s Head Football Coach Adam Guerra thought that the Mariners two back running game did what they had to do to power the offense against a good Bellarmine-Jefferson team.

“I got to give a lot of credit to Bell-Jeff,” said Guerra. “David Machuca is a first year head coach and he has done a great job turning the team around and making them tough.”

The Mariners made some mistakes early in the game and both teams turned the ball over to each other while fighting for control of the 50-yard line during a grueling first quarter.

But in the second quarter, the dynamics of the football game changed with the introduction of fullback Kevin Holubowski whose mere presence freed up running back Nick Pegnato to rush against the Guards.

Kick off returner Melvin Wilson also added a needed spark to the Mariners offense by sneaking in at quarterback and rushing for two first downs and passing for another.

In the second half, the game belonged to the St. Monica with quarterback Luke Cain starting the drive at the Mariners 26 yard line and he swung to his left fighting tackles until he was brought down a yard short of the first down marker to make it fourth and one.

Holubowski took the next rush and got the first down before racing down the field later in the drive to put the Mariners at the three-yard line and scoring on the next play to put St. Monica up 21-14.

Safety Lucas Dretska then spearheaded the defense of the Mariners on a blitz, and deflected a pass thrown by Bellarmine-Jefferson’s quarterback Mitch Kellogg forcing the Guards to punt on their next possession.

The Guards got the ball back on a fumble during the Mariners next drive, but penalties forced them to retreat until Kellogg throw a wobbly ball deep ball that was intercepted by Wilson who ran it back for 60 yards.

“We made some mistakes early on and that will get you,” said Guerra. “On defense we made some adjustments and dug deep. They were running the power package and we had to be on top of our game especially on special teams.”

With the ball back into the hands of the Mariners powerful offense, led by rushers Holubowski and Pegnato, the Mariners drove down the length of the field until Cain found a seam in the Guards defense and sprinted up the middle for a 26-yard touchdown to make the game 28-14.

On the Mariners next possession, Holubowski scored his third touchdown of the night on an eight-yard power rush to solidify the upset victory 34-14 to end the game.

Tandem rushers Holubowski, who scored three touchdowns, and Pegnato who scored one, combined forces to rush for 256 of the Mariners total rushing yardage of 297 yards to power the Mariners over Bellarmine-Jefferson.

“We have the momentum now,” said Guerra. “We needed a win tonight and we came out with a big win.”