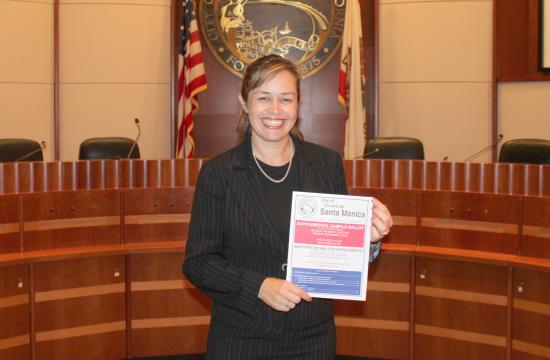 Just two months ago was Sarah Gorman’s first day on the job as Santa Monica City Clerk. Her arrival couldn’t have come at a busier time with the months leading up to Election Day the busiest for the small City Department.

The 38-year-old, who was selected ahead of more than 80 candidates for the post, hailed from Santa Clarita where she ran two elections as City Clerk – the most recent in April.

However, her job this Election Day on Tuesday will be a lot different than in the past: Santa Monica’s three local races (City Council, Board of Education, Rent Control Board) are part of a consolidated election, meaning the LA County Registrar’s office is responsible for the logistics of the election from organizing the City of Santa Monica’s 54 polling locations, to hiring election workers, to counting the votes when polls close at 8 p.m.

Gorman said the election was still an involved process for her office, but much of the preparation was completed well before the big day. She said the City Clerk’s office swung into election mode in early summer when members of the public who wanted to run for public office pulled their nomination papers.

“The candidates, they submit them to us, we see if they have enough signatures, and sometimes they have to go out for more,” Gorman said. “They have to pick their ballot designations, which is their job title. Sometimes there is some back and forth on that.”

She said the next step was finalizing each candidate’s ballot statement.

“We count them and make sure they are exactly 200 words,” she said. “The law requires a special way of counting, for example, ‘Santa Monica’ counts as one word. People are always trying to compress them as much as possible. Our office also gives workshops to prospective candidates to walk them through the nomination process.”

The other major aspect of the Santa Monica City Clerk’s office is the processing of campaign finance filings.

“Essentially, the campaign finance statements are due every six months until they get closer to the election,” she said. “However, during election season, there is reporting on October 5 and then again on October 25, then it becomes 24 hour reporting.”

Tuesday will be the first time Gorman will be overseeing elections for a Board of Education and a Rent Control Board. She would’ve had to oversee the Santa Monica College Board of Trustees election too, but it was cancelled as only the three incumbents showed an interest in seeking re-election.

Since relocating to Santa Monica, Gorman said she was thrilled at the level of interest that Santa Monica residents show for their local political system.

“From my perspective, my career and my love is getting people interested in what local government does,” she said. “We are all about transparency here at the City Clerk’s office, so to have people that care, it’s fantastic.”

With 15 candidates running for the Santa Monica City Council and the fact that four spots are available, Gorman said the number of possible outcomes would create an interesting election.

“It’s just an interesting combination of circumstances that have led us to having four spots open this time, much less two open ones (Richard Bloom and Bobby Shriver are not seeking City Council re-election),” she said. “In Santa Clarita, it was a five member council instead of seven here in Santa Monica. There were 11 candidates in one of my elections where there were two spots available. When you have open spots, it draws more folks.”

Efrain Escobedo, of the Los Angeles Registrar-Recorder/County Clerk’s office, said all contests in Santa Monica (Federal, State, County, Local) would appear on one ballot and voters will vote using an “InkaVote vote recorder” at the polls.

“All ballots are counted at our central location in Norwalk,” Escobedo said. “Ballots are not separated by locality nor are staff specifically assigned to count ballots for a jurisdiction. All RR/CC staff will handle and process ballots as they come in from the more than 4,000 polling places across the County.  Hundreds of County staff will be on hand on Election Night to process ballots.”

Escobedo said ballots would be read and tabulated using high speed optical scan readers and votes would be tabulated by the County’s Microcomputer Tally System.

“We are encouraging voters to visit lavote.net to download their sample ballot and find their polling place before Election Day,” he said. “Voters who have requested a vote by mail ballot must return their ballot with sufficient time for it to arrive at our office by 8 pm on Election Day.”

He said vote by mail ballots should not be mailed any later than Friday, Nov. 2.

“If you don’t have enough time to mail your ballot you may return it at any polling place in Los Angeles County,” he said.