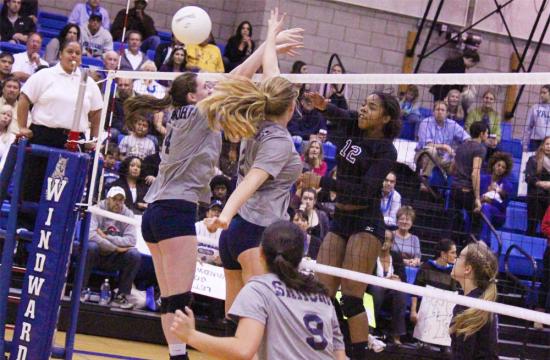 With the win, Windward advances to the CIF Southern Section championship game and Samohi’s season is over.

Wildcats Head Coach Michelle McGuire was proud of Windward’s victory and egged on her team near the end of the third set saying, “now put them away,” while the Wildcat crowd sang the Beatles song “Hey Jude.”

“Our ball control was pretty solid and our blocking really came around,” said McGuire. “In all fairness their setter Blossom Sato did not play. She is a great setter, and I think that had them out of system.”

Sato did play during the third set but to a limited capacity and the Vikings may have been holding her back so that she could recover from an ankle injury in order to be ready for a potential finals game.

“We have to give credit to our team,” said McGuire. “We served really well to help keep them out of system and all of our big guns had good nights offensively.”

The cards seemed to be stacked against Samohi from the beginning of the game from a raucous student body crowd to a free pre-game barbeque for the Windward fans.

In the first set, Asha Walker led the way recording three of her season high five aces to lead Windward to a 25-13 win.

During the second set, Santa Monica High School seemed to recover a bit from the shell-shock of losing the first set by eight points, but the recovery wasn’t enough to swing the Vikings back in the game.

“Since July, serve receive has been the emphasis and it is what got us here,” said McGuire. “When that breaks down, even good teams will struggle.”

After at timeout at 18-16, the Wildcats settled down and stopped a Vikings comeback and posted a 25-22 win.

Finally at 7-1 in the third set, the wheels came off for good for the Vikings and a silence fell over the Samohi fans while the Windward crowd could smell victory.

According to McGuire sophomore libero Alex Saghian, who leads the team in digs, has an “amazing knack for being where the ball is,” and saved potential kills whacked by powerful Vikings outside hitters Joslyn Hayes, Jordan Levy, and Wiktoria Surowka.

“We wouldn’t be here without her,” said McGuire.

Saghian didn’t seem to let any of the Vikings balls hit the floor leading the defense with 19 digs while Tae-Leon Butler spearheaded the Wildcat offense posting 13 kills.

Saghian believes that her team has worked hard to be able advance to the CIF Southern Section finals.

“My team works really hard in practices and in this game it really showed off how much sweat we put into this,” said Saghian.

Next game for Windward is against Rim of the World High School (25-3) in the CIF Southern Section 3AA Championship finals at Santiago Canyon College Saturday, Nov. 17 at 9 a.m.