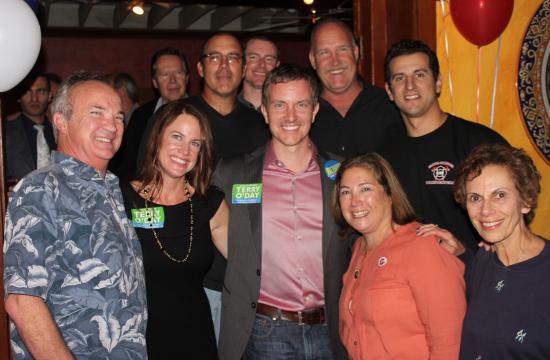 Winterer came out on top after all 54 voting precincts and absentee ballots were counted in the early morning hours of Wednesday. He collected 13,586 votes (15.12 percent).

It was a sweet victory for Winterer, who missed out winning a seat in 2010 by just 56 votes.

There were 60,909 registered voters in Santa Monica this election. There were 18,988 absentee this election, which represented about a third of all local voters.

Winterer and Vazquez claimed the two seats held by Richard Bloom and Bobby Shriver who did not seek City Council reelection.

Winterer said he was delighted by the victory.

“I narrowly lost two years ago,” Winterer said. “It’s gratifying to have such resounding support from the voters.”

He joked everyone had told him in the lead-up that third time would be a charm. He place fifth in the City Council race in 2008 when four seats were up for grabs.

“The art of politics is name recognition and if you run two or three times, people begin to realize that you are in it for the long haul and you are a serious candidate,” he said. “They are familiar with your name and they become more familiar with what they stand for.”

He said he was ready to address the many issues the city is facing, saying traffic was at the top of his agenda.

“We need to take a more aggressive posture about managing traffic in the city and I have a number of ideas about what we can do,” he said. “Most importantly, we really need to prove that the ‘no new p.m. trips policy’ of the LUCE (Land Use and Circulation Element) is going to work.”

During his campaigning, Winterer said residents were concerned about a variety of issues he hoped to address in the next four years.

Among his list, he said the loss of redevelopment agency funding was a big issue, saying it would be a challenge for the city as it figures out how to generate more affordable housing.

“People also remain concerned about environmental issues and we need to do more to take the city to the next level of promoting sustainability,” he said. “People want to make sure we have a robust budget and we have programs for seniors and other people in need. People are very interested in continuing to make sure we have one of the finest police and fire departments in the state. People really enjoy living in a socio-economically diverse city with certain character to its built environment, and those are things that will be a challenge for us to make sure we preserve those.”

He said he looked forward to serving the people of Santa Monica.

“I hope that I’ll live up to the expectations they clearly have for me,” he said. “I have strong ties to the neighborhood groups and the community. To that extent, they will always have open dialogue with me. I will do my best to represent their positions and opinions as various issues come before the council.”

Winterer said he would miss his colleagues on the Planning Commission.

“They are all thoughtful, hard-working, and collegial. I’ve really enjoyed the way we’ve tried to respect differences of opinion, work together to come to consensus when possible, and respect everyone’s opinion when not possible,” he said. “They are a great group of individuals that have done great work for this city, so I will miss them.”

O’Day said he was pleased with the outcome and happy to serve as a councilmember again – this time as his first four-year term.

He joined the council in February 2010 to fill the seat left vacant by Mayor Ken Genser (Genser passed away a month earlier). He served nine months before being elected in his own right in November 2010 for a two-year term.

He said he was ready to tackle the big issues facing the future of the city.

“This council will determine the fiscal pathway for the city that is different than that which the city has pursued over the past 20 years because of the dissolution of the RDA (Redevelopment Agency),” O’Day said. “I think that’s the most pressing and potentially most lasting element of policy that we will be working on.”

He listed the future of Santa Monica Airport when the current agreement with the FAA expires in 2015 as the second biggest issue. He said he would also like the city to implement its goals to becoming water self-sufficient and be more prepared for the arrival of Expo Line in 2016 in terms of bike access and safety.

Like O’Day, Davis said she was honored that voters had elected her to serve a full four-year term as well.

She joined the council in February 2009 to fill the seat of Herb Katz (Katz passed away a month earlier). She was elected in her own right in November 2010 for a two-year term.

After serving as Mayor Pro Tem for the past two years, she remained tight-lipped on whether she would put her hand up for Mayor.

“I’ve really enjoyed being Mayor Pro Tem and I’ve learned a lot, not just about how the city operates and all the exciting things that are happening in the city, it certainly helped me sharpen my leadership skills,” she said. “Being mayor is something I want to think about.”

She said one issue she would take up on council was to look at the process of how major developments are approved.

“I think there is a lot of uncertainty, dissatisfaction, and lack of clarity surrounding that process,” Davis said. “I think that if we’re going to continue to consider these large proposals, we need to really refine that process. That would be one thing I would hope that the council could work on.”

She said another thing she would address was traffic.

“We really need to look for some short term solutions that may be as simple as working with the City of LA to stop some of the gridlock at some of the intersections that are in West Los Angeles to stop traffic back ing up into Santa Monica,” she said.

Vazquez did not return requests for an interview before press time.

Santa Monicans for Renters’ Rights reaffirmed its position as the most power politicial organization in the city, with the election of its four-person slate of Winterer, Davis, O’Day, and Vazquez.

On July 22 this year, Winterer and Gleam Davis were endorsed first by SMRR after members of the political organization voted in three rounds.

To gain endorsement from SMRR, candidates were required to pass a 55 percent vote threshold from members – or 109 votes.

Winterer claimed the endorsement in the first round after topping the field with 125 votes.

In the second round of voting, Gleam Davis secured the second endorsement with 101 votes – the threshold was lowered as fewer ballots were cast.

The other four candidates on SMRR’s ballot – Tony Vazquez, Frank Gruber, Shari Davis, and Terry O’Day – failed to collect enough votes in all three rounds of voting to meet the threshold to receive the organization’s endorsement.

Vazquez came the closest in the third round voting. He collected 82 votes, but the threshold was set at 95 votes.

SMRR chair Patricia Hoffman told The Mirror it felt good that all four of its endorsed City Council candidates were elected Tuesday.

To add to SMRR’s success, its endorsed candidates for both the SMMUSD School Board and Rent Control Board were all elected Tuesday as well.

“I think it’s unprecedented that we had 100 percent success,” Hoffman said.

She said there was quite a number of excellent candidates this election.

“There were so many well qualified candidates,” Hoffman said. “The fact that we had a real ground campaign where we did positive mailers helped us get our message out. Obviously our name is well known and people trust us. Homeowners trust us as well as renters. We have a very high acceptance rate in the community.”

Of the three other sitting council members, Pam O’Connor and Kevin McKeown are also SMRR-backed. That means the only member on the council when it reconvenes will be Bob Holbrook.

The LA County Registrar’s Office administered the election as it was a consolidated election. According to Election Code, the timeline for the Registrar’s Office to present the Santa Monica City Clerk’s office with the final canvass is 28 days, which would be Dec. 4.

The City Clerk is then required to prepare the certified canvass and resolution for Council approval at the next scheduled City Council meeting on Dec. 11, 2012 at Council Chambers at City Hall. The transition of incoming and outgoing officials will occur at this council meeting.