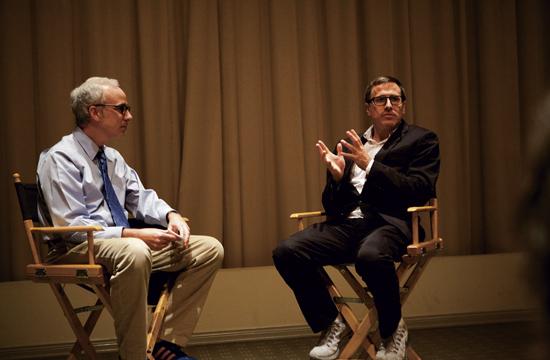 In 1985, Patty Cohen and Cathy Tauber shared a passion for film and opened Vidiots, the movie-rental house on the corner of 3rd Street and Pico in the Santa Monica seaside neighborhood of Ocean Park.

Over the course of 27 years, they have accumulated more than 50,000 titles, including rare and hard-to-find films, documentaries, and television series from all over the globe.

Vidiots is the go-to store for cinephiles, filmmakers, and production executives – a community hub where movie lovers can gather, browse, and find inspiration.

To quote filmmaker Oliver Stone: “Vidiots is a video delight. And like a good old bookstore, a secret treasure to find and linger over.”

With Netflix and OnDemand thriving, stores like Rocket Video and Blockbuster are closing.

In the past few years, with business flagging, Vidiots has experienced its own financial crisis.

Cohen and Tauber have used tremendous ingenuity not merely to survive but to persevere.

With the opening of the Vidiots Annex, an adjacent state-of-the-art screening room, they found a new source of income by renting the space for screenings, parties, and workshops.

After 27 years of free events, Vidiots wanted to revive their original purpose: community, preservation, and education.

In order to achieve this goal, Vidiots has raised funds through a successful auction last summer via Charitybuzz.com, which enabled them to establish the Vidiots Foundation, a non-profit arm of their DVD-rental business.

Now filmmakers can share their work with the community through free screenings and exhibitions.

Although Vidiots still needs patrons to tear themselves away from their DVRs and step up their rental and purchase of DVDs at the store, the Vidiots Foundation is enjoying its new non-profit status as an educational and cultural hub.

In an effort to support the Vidiots Foundation, filmmakers such as David O. Russell have rallied.

He asked the Weinstein Company to allow the free event to raise awareness of the mission and purpose of the newly launched Vidiots Foundation.

Currently, Vidiots Foundation is presenting a series of 12 documentaries called “Something To Talk About.”

Each month Vidiots will screen a new, critically acclaimed documentary feature. Last month it screened “Battle For Brooklyn.” Earlier this month were screenings of “The Rolling Stones: Charlie Is My Darling” and “Big Boys Gone Bananas,” the true story of a Swedish filmmaker and a banana corporation. On Jan. 18, “Stolen Seas: The Untold Story of Somali Piracy.”

In August Vidiots hosted a free documentary workshop and will be offering a second one soon.

On the Educational Outreach front, The Vidiots Foundation is partnering with the Virginia Avenue Project – a free, after-school program that uses the performing arts to help kids discover their full creative potential.

For example, its monthly storytelling night, Tale Spin, was created so that the community could gather and tell true stories based on a theme – non-competitive and more intimate than similar events like The Moth.

On Dec. 8 a three-hour workshop will be offered called “The First Ten Pages: The Do or Die of Selling Your Screenplay.”

The workshop will guide attendees through how to achieve that crucial hook in the first sequence of a screenplay.

The $99 fee will include the new ScriptReader software program ($120 value) and a workshop setting in which attendees can share their pages with the instructor and other participants. Anyone interested may sign up in the store or call 310.392.8508.

In early 2013, there will be screenwriting/story structure classes in the Annex as well.

With the holidays upon us, Vidiots Foundation has launched its winter online auction once again through www.charitybuzz.com/auctions/vidiots2/catalog_items.

The Foundation is continuing to solicit donations and services from producers, writers, directors, or entrepreneurs of any kind.

Through Charitybuzz, past donors have enjoyed the free publicity, and new clients.

Anyone in the holiday spirit who would like to make a tax-free charitable donation can do so at vidiotsfoundation.org.