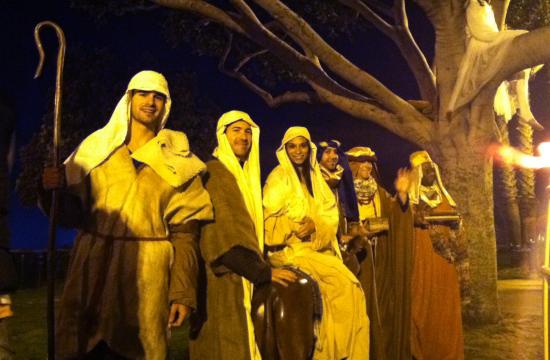 With the unattended Nativity scenes now on display through the first week of January on private property on the 2700 block of Ocean Park Boulevard, a number of attended displays are being held nightly from 7 p.m. to 9 p.m. through Dec. 23 near the entrance to the Santa Monica Pier.

Primo DeJesus and Randy Bresnik, members of the Trinity Church of Santa Monica, are behind the idea of the interactive holiday events as the much-hyped Nativity scenes ban only applies to unattended displays.

DeJesus said a wide range of churches representing various religions and races had signed on to participate with one or two churches taking part each night.

“We wanted to get all of the churches represented to use it as a meet and greet,” DeJesus said. “It’s important to get themselves into the public and put some Christmas cheer out there.”

He said coffee, hot chocolate, tea, and cookies would be offered for free each night.

He said each church was allowed to come up with their own two-hour display whether it be Christmas carols, concerts, or simply handing out literature about their church and answering questions.

“I realize some of the churches aren’t used to engaging with the community,” he said. “The churches are playing a larger role in people’s lives. People lives cannot be truly balanced unless there’s a spiritual component.”

This Sunday night, leading Pastor Rick Warren from Saddleback Ranch in the Orange County is expected to bring 1000 people from his church for a flash mob at 7 p.m. Warren was invited by Metro Calvary Chapel at 1420 Yale Street in Santa Monica.

DeJesus said the first event of the attended holiday displays kicked off Dec. 3 with an olive branch ceremony, and DeJesus said the activities are meant to put any feelings of disappointment with the city banning decision into the past.