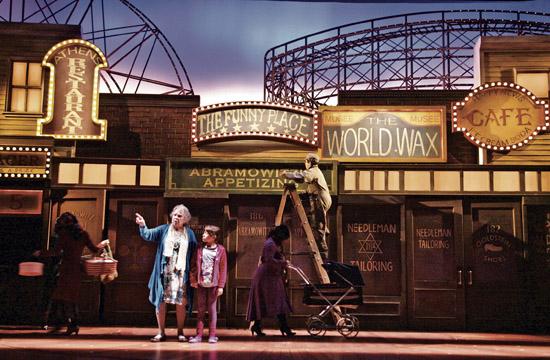 The creeping stress of holiday madness is upon us. Presents to buy. Cards to send. Decorations to be retrieved from boxes and bags in the garage. Spare rooms reorganized for the onslaught of visiting relatives. Oy vey. It’s enough to make a person crazy. But wait. Relief is here and can be found on stage at the Geffen Playhouse in the Pulitzer Prize winning playwright’s over-the-top delightful, well-written play, “Coney Island Christmas,” which is based on “The Loudest Voice,” a short story by Grace Paley.

Clara is supposed to be showing up at school to be in a play, but is not feeling well. Transplanted from the east coast, grandma makes loving, small talk about living in Los Angeles observing, “80 degrees at Christmas is meshuggina” (crazy) and referring to the fact that she’s getting older, quips, “The girl inside me never gets old, only the wrapping paper.”

The relationship between the two of them is totally developed and believable. Grandma gives Clara an icicle pop and begins to take her on a journey back to her own childhood in 1935, retelling the story of her theatrical experience in school. Throughout the flashbacks, the two of them are on stage observing the action.

Presented on a bright, picture book set designed by Takeshi Kata, grandma’s younger self, gorgeously played by a very talented Isabella Acres, takes us through the experience of living in Brooklyn with her immigrant parents. Her dad, Mr. Abramowitz, is played by Arye Gross who has mined the fields of his character to present a stunning, nuanced performance. He owns a small grocery store and when a customer complains about there being bone in the white fish, he replies: It might come as a surprise to you, but fish have bones.” He is more liberal than his mostly inflexible wife, played with just the right amount of stubbornness and harping by Annabelle Gurwitch and for a good part of the play, is the only unlikeable character. But don’t despair; she does finally emerge as a “nice guy.” In a very nostalgic sequence, the family is in the living room listening to the radio and we hear snippets of a baseball game, a speech by FDR, music by the Andrew Sisters, and a short bit by Jack Benny.

Young Shirley is in a Thanksgiving school play, which becomes a hilarious play-within-a-play retelling the legend by the ensemble of very talented young actors who capture the spirit and imagination and physicality of what it was like to be a little kid in a school play. Watch Evie Slotnick played by Kira Sternbach as her performance will bring gales of laughter as she clumsily tries to remember her lines and place on stage. Her stage presence and comic timing are impeccable.

Prepare yourself for much laughter as the ensemble go through their paces, with visible off-stage direction from their French music teacher, Miss Glace, appropriately played by Lily Holleman and the director of the play, who is smitten with Miss Glace, Mr. Hilton, charmingly played by John Sloan. Shirley steals the play by appearing as a most animated turkey and because of her outstanding performance, Mr. Hilton wants to cast this Jewish girl in their Christmas show as yes, Jesus, and here’s where the religious feathers begin to fly.

Shirley is overjoyed at being cast as the lead, but encounters a brick wall when she tells her mother. Dad is ok with the idea, but mom is adamant that it’s a betrayal of her religion and her heritage and demands that she withdraw from the play. This budding thespian is heartbroken and does withdraw from the play. She’s so overwrought, however, that her sympathetic dad gives in and says she can do the play, “But don’t tell your mother.”

It’s opening night and the Christmas pageant begins. Never in your life will you see a more fractured, hilarious retelling of the birth of Christ as the characters include Santa Claus, (where’d he come from?) three very whacky Wise Men, and Scrooge. That delightful Kira Sternbach plays Mary with such profound innocence and lack of guile that once again you will be driven to laughter.

Poppa shows up to watch the show and in short order, lo and behold, so does momma who quips at the end of the play, “Did it have to have so much Christ in it? A little Jesus goes a long way.” It should be said that underneath all the laughter is also the story of how an immigrant family tries to cope with their new home in America, how they try to hang on to traditional cultural and historic values and their struggle to define what it actually means to be an American.

The production values of “Coney Island Christmas” are excellent beginning with Costume Designer Ann Closs-Farley’s pitch-perfect period clothing, Lap Chi Chu’s Lighting Design and Composer/Sound Designer John Ballinger’s music – all working together to create an unforgettable magical holiday ride guaranteed to have you leaving the theatre with a big smile.