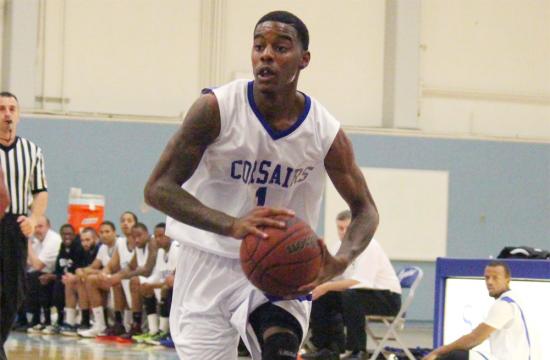 Even with the win, SMC guard Keilan Horton thought that the Corsairs could have played better.

“We didn’t play to our best abilities,” said Horton. “We played sloppy and without any energy. We are a better team then this.”

The Corsairs found themselves down 57-52 against the Seahawks with 8:22 left to play in the game.

Nwaba got fouled sending him to the line where he converted two free-throws to edge the Corsairs to within three points before SMC forward Henry Anyanwu hit a bucket to make the game 57-56.

Seahawks forward Aubry Myers raised the stakes with a bucket to put LA Harbor ahead 59-56 before Anyanwu hit another bucket to keep the game tight at 59-58.

After two converted free throws, Seahawks forward Shane Smith powered in a bucket to make the game 63-58, but Nwaba responded by driving up the lane for a basket to put the Corsairs to within three at 63-60.

Nwaba got fouled again and made his next two free throws to push the Corsairs to within one point at 63-62.

LA Harbor extended the lead to 65 points off a basket by forward Andre Foster but the Corsairs responded with a three by guard Keilan Horton to tie the game 65-65 with one minute remaining in the game.

Foster missed his shot on the Seahawks next possession whereas Nwaba made his shot to push the Corsairs ahead for the win at 67-65.

“I am happy to an extent because we used to blow teams like this out,” said Horton. “But honestly, a win is a win so I am proud of my team.”

Next game for the Corsairs is away against Diablo Valley Friday, Dec. 28 at 7 p.m.