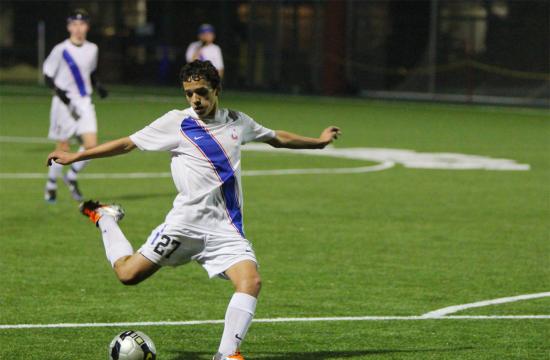 Crossroads Boys Soccer (3-1) shut out Verbum Dei (0-1-2) in a game where the first half merely warmed up the Roadrunners before they took control of the game scoring three second half goals to seal the deal 4-0 at home Tuesday night.

Crossroads Boys Soccer Head Coach Federico Bianchi thought that the Roadrunners “played well” against the Eagles and have “improved” after winning a game against Buckley 2-0 on Nov. 30.

“The game before we played against Buckley, which is a weaker opponent, and we took them lightly,” said Bianchi. “We won the game, but we didn’t play as well as we should. All these games leading up to league are preparation for league and we want to keep improving.”

In the second half, Ali Martinez sprang alive scoring two straight goals against the Eagles with his second goal coming off of a penalty kick.

Lennon Kloser scored the final goal for the Roadrunners to make the game 4-0.

“From the Buckley game to this game, we have definitely improved,” said Bianchi. “We moved the ball a lot better, we played with less touches, and we created a lot of good opportunities.”

Next game for Crossroads is away against Lawndale Dec. 6 at 3 p.m before playing away against Inglewood Tuesday at 6 p.m.