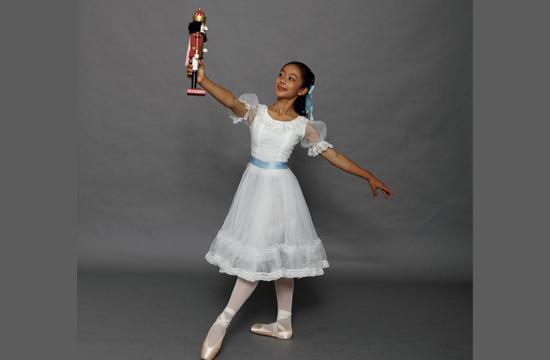 The Marat Daukayev Ballet Theatre will present the “The Nutcracker” this weekend (Dec. 14-16) at The Luckman Theatre near downtown LA with Crossroads School 6th grader Anna Yeh dancing the lead role of Masha.

With more than 120 student dancers and 500 costumes, acclaimed Russian artistic director Marat Daukayev presents a restaging of the holiday classic’s celebrated 1934 choreography and a larger corps de ballet than ever before, reaffirming the ballet’s Russian roots as a magical holiday story for children and adults.

Yeh, 11, leads the production that features dancers aged 3 to 17 whose artistry and poise belie their young ages.

“The preparation is just like any other rehearsals that other soloists do,” Yeh said. “First I work very hard by myself scene by scene in rehearsal. Then I practice with the other people in my scene, and we try our best to make the entire scene better. At home I watch professional DVDs or Youtube to learn how they express themselves in the scene. I also watch our previous DVDs and how the previous Masha (aka Clara) expressed herself in the same scene.”

She said this production was much different from others she has performed in.

“First, we take this production so seriously because everybody is paying for our show, which means that we are a part of a professional space,” she said. “So we take many hours to practice and prepare costumes and everything professionally. Also, so many people are coming for our show including my teachers, friends, and family.”

Last February, she competed in the Youth America grand Prix – the world’s largest student ballet scholarship competition and placed Top 12 in the pre-competitive division at the Regional Semi-finals in Huntington Beach.

In August, she placed Top 24 in the Japan Grand Prix Final, Saitama, Japan and was awarded the Nara Governor Award (5th place) at the Ballet Competition in Nara Final (Vaganova Ballet Academy) in Nara, Japan.

She said she loved ballet because she feels like she can just be herself.

“I have a lot of things that I love to do, but ballet is totally different level of love,” she said. “I think I really want to be a ballerina and work as a ballerina later on in my life. I am so happy that I will be able to make everybody happy through my ballet.”

She said she wanted to say thank you to her teachers and parents for supporting her.

“I will do my best and everybody in my school is working very hard,” she said. “So please come and see our show. We’re looking forward to seeing you at the theater.”

During his 20-year career at the Kirov, Daukayev danced the leading male role in the complete classic repertoire with the Kirov.