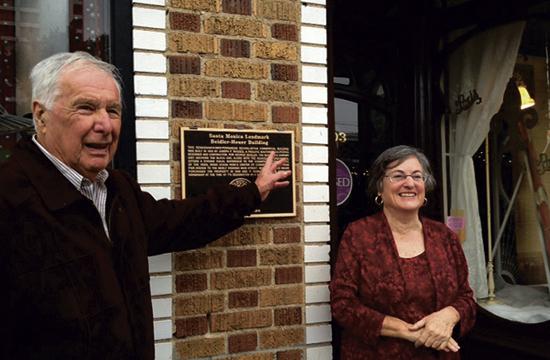 A plaque dedication ceremony was held Sunday, Dec. 16 at the City Landmark Biedler-Heuer Building at 2701-2705 Main Street, one of the original 1920’s commercial buildings that established Main Street as Ocean Park’s premier business street in the new era of the automobile.

An excellent example of the Renaissance/Mediterranean Revival brick commercial buildings of its time, the Biedler-Heuer building set the scale for the block and now serves as a visual and spatial connection to the past commercial streetscape that once encompassed much of the Main Street streetscape and still defines its essential character.

It was designed by Joseph F. Rhodes, a prolific Southern California designer and contractor in Santa Monica and Los Angeles during the 1920s and early 20th century.

The building, which has been home for more than 35 years to two of Main Street’s most longstanding and endearing eclectic businesses – Jadis and Paris 1900 – also features a 1981 Art Nouveau style storefront designed by the late Parke Meek, the master Eames designer and Jadis proprietor, and Roger Johnson.

The design was inspired by an original Art Nouveau style storefront of a flower shop located at 13 Rue Royale in Brussels, Belgium.

The building is also home to Wolfgang Puck’s Chinois on Main banquet facility, adjacent to Puck’s premier Chinese-French fusion restaurant, which has remained one of Zagat’s top-rated eateries for more than 20 years.

The City of Santa Monica Landmarks Commission designated the property as a City Landmark earlier this year on Jan. 9.

The owners, William and Lenore Lambert, placed the plaque to call attention to the history and simple charm and beauty of Main Street’s early commercial buildings.

Mrs. Lambert is the daughter of Samuel and Evelyn Heuer, who operated a paint store at the location from 1938 to the 1960s, purchasing the property in 1946.

The plaque dedication ceremony was hosted by the Lamberts, along with Bella Lantsman (Chinois on Main), and Susan Lieberman (Paris 1900 and Jadis).