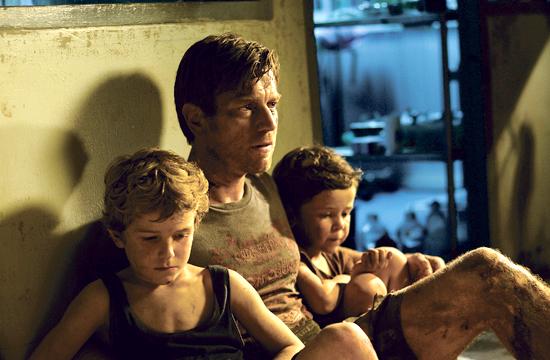 It is no accident that the perennial youthful and stunningly handsome Ewan McGregor is an international acting treasure who has racked up a list of impressive credits earning him the Number 9 spot on Channel 4’s Greatest Movie Stars of All Time.

His breakout role was in “Trainspotting” in which he played a heroin addict and since then starred in such films as the prequel trilogy of “Star Wars” playing Jedi Obi-Wan Kenobi, the love-struck poet in “Moulin Rouge,” the son in both “Big Fish” and “Beginners,” as well starring roles in “Black Hawk Down,” “Cassandra’s Dream,” “Emma,” “Ghost Writer,” and “Angels & Demons.” Theatre trained, McGregor also received accolades for his stage performances in “Guys and Dolls,” and “Othello.”

His latest film, “The Impossible,” is the heart-wrenching story of a family’s struggle for survival in the wake of the horrifying tsunami that hit Thailand the morning after Christmas in 2004. One of the worst natural disasters in history, it tells the story of determination and bravery under unimaginable conditions. McGregor plays Henry, the father and co-stars with Naomi Watts as his wife, Maria, and three wonderful young actors who play their sons – Tom Holland (Lucas), Samuel Joslin (Thomas), and Oaklee Pendergast (Simon). The film is a monument to honoring the best that human beings can be in the face of unspeakable carnage.

McGregor recently sat down with a group of select journalists to discuss the film, along with personal revelations, and the following has been edited for content and continuity for print purposes.

What this family went through is beyond belief. Did you meet the father who you played as Henry?

Ewan: I met him when the family came out to Kolok (Thailand) where we were shooting, after about a month of filming. I did have telephone calls with him. They are a Spanish family, but we decided not to play them as a Spanish family, so I felt like I was concentrating playing the guy on the page. The character in the script is Henry and I used the things I learned from the real father about his experience, but also things I learned from other survivors. I met this amazing woman in London who was very gracious and told me her story. She lost her husband in the tsunami and she has three children and her story is very similar to my character’s in that she was with her two younger kids and her husband and eldest daughter were separated. She didn’t know where they were. So her experience and journey was very similar to his (Henry) in that she was looking for them. She would find somewhere safe to leave her kids and then she would search for her daughter and her husband.

Was this as physically challenging for you as it was for Naomi Watts?

Ewan: It wasn’t physically very challenging for me because I’m not in the water. I think for Naomi and Tom (Holland, who played the oldest son) the action sequence with the wave was pretty brutal, but for me not so much.

You have four children. How was it for you emotionally? Did you personalize the experience?

Ewan: I suppose you’re acting always from two things – your imagination and from your experience in life, so it’s impossible to remove that. But it’s not very nice to think about those things so I try not to. I didn’t make myself think about my kids ever because I wouldn’t do that. But, I had these great little boys, these three fantastic kids that Naomi and I were lucky to work with and I was able to think about them. We created this family that I believed in and there was a reality that we created and I was able to use that. I just thought about them, really, and how desperate it would be in that situation. Being a parent, of course, this for me was the first real exploration of parenthood in my work because I haven’t really played a dad before. I can’t think if I have. So a very important, huge element of this movie is the family, the love of the family.

As the father of four girls, did you learn anything about boys from this experience?

Ewan: Boys are physically more demanding. There’s more sporting occasions, it seems (laughter). Not quite as much emotional drama. My house is a perfect house for an actor. There’s just so many dramas. It’s like Shakespeare every day (laughter) whereas with my boys, it was more about football and table tennis. But I loved them so much. I saw the little one, Samuel, in London two weeks ago when we had the premiere there. I hadn’t seen him for a long time. I have seen Tom a lot because he’s doing a lot of the publicity for the film, but the little boys haven’t. So it was so nice to see the little guy. We created a really nice bond and we were very comfortable in each other’s company and I like them very much. I was worried that maybe that was gone and it would be awkward and for the first three or four minutes it was a little awkward, and then it was straight back to being where we were.

You are constantly working. How does that impact on your family?

Ewan: Movies take three or four months to shoot and there’s always a gap in between them. When I’m around, I’m totally around and when I’m gone I’m often gone for some stretches of time, but I often can come back. From Thailand, for instance, I made several trips back home because there’s lot of the film that I’m not in so if I wasn’t needed for two weeks or a week, I would go home. Also, any school holidays or breaks in their schedule, they would come to me. We make it work. It’s all right. It’s the way it’s always been.

You’re ageless. How do you keep fit and looking so great?

Ewan: I’ve got quite a lot of make-up on (laughter). I’m active. I like to be moving around. Sometimes it’s difficult. When we spend summers in London or Paris, we always drop weight because you walk hundreds of miles like in New York or any city except this one (referring to LA) or Bartlesville, Oklahoma where I recently worked. They’re the kind of towns where you don’t get out of your car so you don’t have that natural burning of calories in your day-to-day life so I like to go and do it myself. So I like to cycle. I kind of like the sub culture of bicycles. I like to run. I’m pretty much a stranger to the gym. I don’t like working out in the gym, but I do stuff in my house or I quite like getting on my bike and riding 15 or 20 miles or something and it becomes an adventure, whereas being in the gym is just boring.

I actually know people who grew up in Bartlesville. What were you doing there?

Ewan: You do? Bartlesville is a sweet little town. I was there making a film called “August: Osage County” which is the Pulitzer Prize-winning play by Tracy Letts and we shot there for eight weeks and it was great. It’s an amazing play and it’s kind of interesting when you’re acting on amazing writing. You can have a cerebral understanding that something is good when you read it, but when you start playing it, when it’s really good, then you really feel it. In that particular play, there’s lots of amazing writing. There’s a dinner scene where all of the characters from the play are around the table in one place at one time. It was a 14 or 15 page scene and we shot it over three days. When you were playing that scene, you had a heightened understanding of just how good the writing is.

Who else is in the cast?

How was it working with the iconic Meryl Streep?

Ewan: She’s amazing, oh my God, and doesn’t disappoint, I can assure you.

Do you plan another long motorcycle trip?

Ewan: We don’t have any plans to do that at the moment. I’ve got a 22-month-old baby and I’m not going to leave her. When I spend time away on my work, I can’t reconcile going off for four or five months to do that trip on my own time, if you like, so I’ll do it when they’re older.

We must ask this question. Why do you think there’s so much attention to the possibility of another “Star Wars?’

Ewan: There is going to be another one. There’s not any interest in whether I’ll be in it, but there is massive interest in the films themselves because they are massive, legendary movies and the original idea was that there would always be nine stories and George (creator of the series, George Lucas) told me he wasn’t going to make the last three so everyone assumed that would be it and that there would just six. So people are excited that it will be completed.

Would you be opposed to going back if they wanted to cast you in a role?

Ewan: I’ll be there if they need me (laughter). I wouldn’t want to see someone else playing Obie-Wan Kanobi. Alec Guinness isn’t available (laughter). (He died at the age of 86 in 2000).