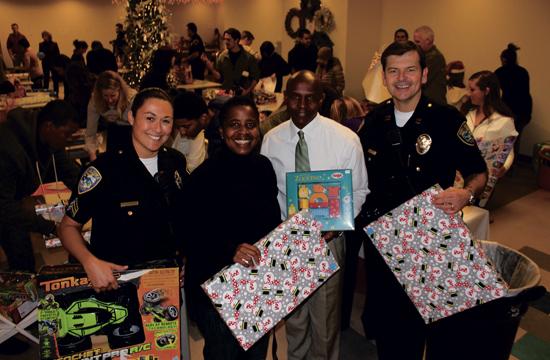 About 300 members of the Santa Monica Police Activities League (PAL) aged 6-17 received a present as part of “Best Gift Ever” Toy Drive Thursday afternoon after time of press.

Earlier this week on Tuesday evening, community leaders and volunteers came together for the “It’s a Wrap Party” at Santa Monica Place’s community room where more than 300 gifts were wrapped.

From mid-November through mid-December, community residents and local businesses donated gifts at drop-off locations including ICE at Santa Monica at 5th and Arizona and Santa Monica PAL at 1401 Olympic Blvd.

This year PAL teamed up with Santa Monica Place and PS#1 school that signed on as major sponsors.

PAL Director Eula Fritz, who has been involved with the “Best Gift Ever” initiative since its inception, said the toy drive was her favorite event of the year.

“To see the look on a kid’s face when they are presented with a bike or any other gift, which may be the only gift they receive for Christmas, it’s a feeling I can’t even describe,” Fritz said. “We’ve had kids who cry because they are so overwhelmed.”