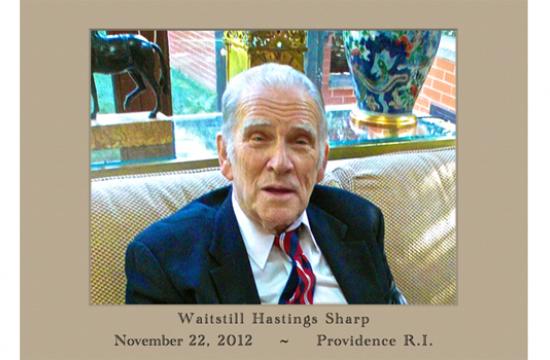 At Thanksgiving this year I learned from my cousin Nina Patterson, a former resident of Santa Monica Canyon, that she had located a mutual friend who once rented an apartment from her family and had moved away ten years ago.

Waitstill Hastings Sharp Jr. was a man for all seasons and the most unforgettable person I met since moving to Santa Monica in 1964 to attend the USC Masters Program in Cinema. Cousin Nina had encountered Hasty for the first time as she walked down the steps of the Widener Library as a freshmen at Harvard. Hasty literally jumped out from behind the bushes imitating a gorilla. Nina said it was quite a shock for an innocent freshman just starting college.

Hasty attended Harvard University for two years, dropping out in 1952. He entered the U.S. Army 44th Signal Co. at Fort Lewis, Washington as a radio repeaterman. He suffered a serious head injury while in the Army which impacted his short term memory. I remember Hasty describing how family members helped him to “re-learn” his life. Using a number of small datebooks he wrote the “history” of his life. The names of friends, dates, places and descriptions were written in miniscule handwriting.

Hasty was involved in a wide range of interests. He was an accomplished skier and bought land near Mammoth Mountain. He played piano, favoring jazz compositions, and sang as a baritone with a Baptist church choir in Santa Monica. He often wore Levis, with ornate belt buckles and western boots in remembrance of his time as a working cowboy.

Hasty and I shared an interest in aviation. He owned a 1968 Cessna 150 and invited me to fly with him from Santa Monica Airport to the airport at Catalina Island. On our way across the Catalina channel I said I felt completely safe with Hasty at the controls in spite of his short term memory deficit. He was a skilled pilot.

While renting my cousin Nina’s garage apartment in Santa Monica canyon he took care of several bee hives. To see Hasty dressed in his beekeeper’s outfit using a smoke dispenser to calm the bees was a sight to behold. Occasionally bees would get inside his protective clothing. Despite being stung on occasion he was ever the professional beekeeper tending to his bees.

Hasty owned a slightly dented light blue 1950’s Volkswagen Beetle which he repaired himself with all the needed tools, many stored in his apartment. He placed a large band aid on the rear of his VW to acknowledge the fact that his Beetle would run forever.

Immediately after the 1971 Sylmar earthquake struck the Los Angeles area, Hasty ran from his apartment in Santa Monica Canyon into the street shouting out “Repent” to all his neighbors. That is how my cousin Nina remembers our friend.

Shortly after Hasty’s passing I spoke with his nephew Artemis Jukowsky III for the first time. I learned that Hasty’s father and mother were involved in a remarkable humanitarian effort. His father the Reverend Waitstill Hastings Sharp was asked by an official of the Unitarian Church to undertake a mission to Czechoslovakia in 1938 to assist in saving the lives of individuals threatened by the Nazis. Seventeen Unitarian ministers declined to participate. Reverend Sharp, the eighteenth, agreed to undertake the mission with his wife Martha.

A remarkable documentary film, Two Who Dared: The Sharps’ War has been produced by Artemis Jukowsky III, the Reverend Sharp’s grandson. Jukowsky , a non-profit activist, film producer and venture capitalist said it took ten years to complete the film which is expected to be shown in Los Angeles and other cities through a grass-roots, community based effort, at churches, synagogues, theaters and schools in cities worldwide the week starting April 7, Yom HaShoah, Holocaust Remembrance Day.

Martha Sharp and her husband, Waitstill, departed for Czechoslovakia in February 1938 on a refugee mission. The Sharps arrived in Prague, the location of the largest Unitarian church in the world, with $28,000 in aid. The church had created a network of volunteers and agencies to provide for the safe passage of Jews and non-Jews out of Prague. The Nazis entered Prague in 1939 creating a dangerous situation for Reverend Sharp and his wife Martha who risked arrest and execution for their work.

In June 1940 the Sharps set up an office in Lisbon, Portugal to continue their refugee work. They travelled to Nazi controlled France to assist refugees escape. They were responsible for helping the renowned German Jewish author, Lion Feuchtwanger escape to New York. Feuchtwanger settled in Pacific Palisades. His residence Villa Aurora is now the site of a foundation.

Two Who Dared: The Sharps’ War documents the lives of Reverend Waitstill Sharp and his wife Martha using their recorded interviews, letters and unpublished memoirs. The Sharps are honored in Israel as Righteous Among The Nations at Yad Vashem the memorial to the millions of Jews who perished during the Holocaust. At Yad Vashem, the names of three Americans are inscribed: Waitstill Hastings Sharp, Martha Sharp and their friend Varian Fry.

For complete information on “Two Who Dared: The Sharps’ War” go to www.twowhodared.com.