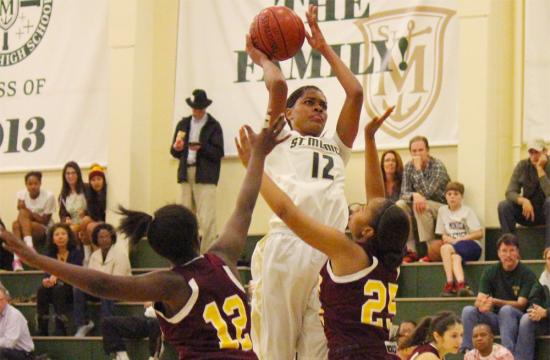 At the end of the tournament, St. Monica was the only team left unbeaten.

St. Monica Girls Basketball Head Coach John was proud of the way St. Monica was doing in the Tournament Thursday night, and was particularly impressed with the way the Mariners were attacking on defense.

“i was really happy with the intensity we brought on defense,” said Skinner. “It’s been our seventh game in nine days. You would think the girls would be mentally worn down but we really came out with aggressiveness and that is something I really like.”

CIF standout Briana Harris, who scored 20 points in the first game against Brentwood School, only played one minute in Wednesday’s game against Paraclete, and sat out the game on Thursday against Notre Dame.

“If that aggressive defense can be a style for us, we are going to be a very difficult team to beat,” Skinner said.

Named to the The All-Tournament Team was Melissa Maragnes of St. Monica, Kaylie Hage of Notre Dame Academy, Dorsa Mehrannia of Beverly Hills, Kennedy Martin of Brentwood, and Paige Endo of El Segundo.

Next games for the Mariners are away against Louisville today at 6:30 p.m. and Flintridge Sacred Heart Thursday, Dec. 20 at 7 p.m.