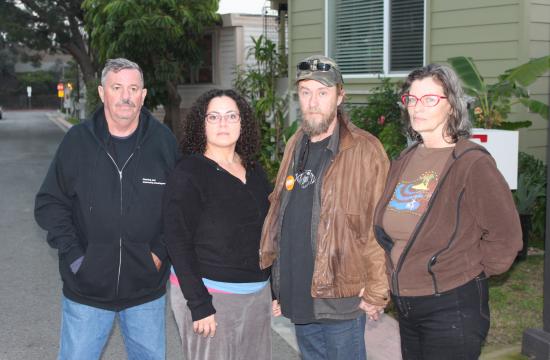 Residents at the Mountain View Mobile Home Trailer Park at 1930 Stewart Street in Santa Monica are suing their landlord, the City of Santa Monica, for $121 million, citing failure to maintain the trailer park, civil rights abuse, and emotional distress.

The Mountain View Mobile Inn Residents Association filed the claim Nov. 5 with the Santa Monica City Clerk’s Office. The association is claiming $1 million per space plus $150,000 financial barrier for each of the 105 spaces at the trailer park.

Residents claim they are being forced to live in substandard conditions, that new construction is carried out under expired permits, and there is ongoing civil rights and fair housing abuse that’s causing them constant mental anguish, emotional distress, and discomfort.

According to documents filed with the City Clerk’s office, there are 15 trailer park residents listed as witnesses.

Since the City of Santa Monica took over ownership of the trailer park on Dec. 22, 2000, residents claim they have become victims of harassment, bullying, and intimidation.

The City purchased the trailer park along with 36 mobile home trailer units as part of a legal settlement with the prior owner to preserve the park for affordable housing. It encompasses approximately 4.7 acres of land next to the 10 Freeway and is deed-restricted with affordability agreements.

Resident Janet Mendias, who has lived at the trailer park in the same space since 1997, is one of the 15 people listed on the claim.

She is disabled and uses a walker to move around.

She said she has two major issues that the City refuses to address.

First, she said her parking space is located several hundred feet away from her space. Secondly, she said the City has refused to build her a ramp to access her front door after the land below her space was significantly raised to accommodate the upgrade of the trailer park’s sewer system.

“It’s extremely difficult,” Mendias said. “I used to have one step that was a nine inch drop. Now it’s a 39 inch drop and there is the possibility of me falling.”

She said a contractor constructed a temporary set of stairs made of wood planks, but she said it’s simply not safe and should not be a long-term solution.

She said her parking space has been a point of contention for almost two years.

When the trailer park was renovated to widen the streets, she said her parking space was moved to near the entrance of the park.

She said another resident allows her to use his space that’s much closer, but said it was ridiculous she cannot park directly opposite her home in one of the spaces allocated to a currently unoccupied mobile home space.

“I’ve really lost the motivation to go to my car and start it up to go places,” she said. “I’ve completely lost the motivation to do that for myself. I would really like a parking space that I don’t have to play musical cars with. It brings up a tremendous amount of pain for me. It’s something I really don’t want to think about. It’s causing problems in my life and I don’t really appreciate what the City has done and certain individuals know about that.”

She said residents often come to her about bullying, harassment, threats, lawsuits, and uncalled for eviction notices, and she said she has experienced harassment first-hand.

She said the general unwillingness for anyone to address their concerns was a constant frustration.

Unlike every other renter in the City, she said trailer park residents cannot go to the Santa Monica City’s Attorney’s office for help as it is a conflict of interest as the City Attorney must first protect the City.

Instead, residents are told to hire their own lawyers, a luxury most of them say they would do if they could afford it, but simply most cannot.

Van Sickle has taken it upon herself to lead the charge and advocate on behalf of residents in an attempt to restore the park to what residents call a much more pleasant place to live.

She moved to the trailer park in February 1995. She said living conditions and the then-management were fine when she moved onto a site with her own mobile home, as she was transitioning from graduate school in the Bay area to her first major professional job.

However, when the City of Santa Monica purchased the park 12 years ago, she said life at the park took a turn for the worse.

“We have had a series of abusive managers and we have been slowly but steadily losing park amenities,” Van Sickle said. “The worst part of my residential life was the three plus years of infrastructure improvements in the park. I worked at home and I was living in a toxic environment of dust, poor air quality, terrible noise all day long, and the destruction of personal property. I ended up losing my parking place of 14 years and some additional amenities.”

She said she endured a drawn-out Rent Control Board hearing for those losses and won in 2011. However, due to technicalities, she said the loss of her parking space and a few other amenities were dismissed from that hearing, which lasted two and a half years.

She said she now has go through another hearing to fight back for those amenities.

Van Sickle said the majority of families living at the park are disgruntled with the way the City has operated the trailer park.

She said its association members meet monthly and they all have questions that keep going unanswered.

Earlier this year, the Residents Association voted to spend $900 out of its member fees (about 30 families pay $10 a year to be a member) to hire an independent professional inspector with 30 years’ experience to examine the property and write a report. The purpose was for their long list of health and safety concerns to be documented, which residents claim are continually dismissed as unimportant from the trailer park’s management company and the City’s housing department.

Ken Ward, a trailer park resident who sits on the Mountain View Mobile Inn Residents Association’s Code Compliance Committee, said a number of residents are concerned for their health and safety, which is why a vote was taken to have the independent report completed.

“We have brought up the issues and problems to management and to the City’s housing department many times before,” Ward said. “But they have always turned a deaf ear to our concerns.”

Trailer park resident Michelle Cole, who has been living at the park since 1984, said it was ironic that the City touted itself as a leader in reducing homelessness and protecting tenants from eviction.

“But when it comes to their own property, they evict tenants and make residents homeless,” Cole said.

Goméz said the work was not completed as ordered by Rosenberg, yet he said the City brought another unlawful detainer case against DePablo.

“This time DePablo lost,” Goméz said. “He lost, I am sure, because Judge Rosenberg was not aware that the repairs were not done. Prior to the ruling, DePablo submitted a motion to the court that would have kept him from being evicted. The motion was a ‘Notice of petition or relief from forfeiture of tenancy.’ This petition was denied which resulted in DePablo being evicted from an uninhabitable unit owned by the City of Santa Monica.”

Goméz said the City “brags about the anti-homeless programs in place,” but said it does not help out tenants when presented with a chance to keep someone from becoming homeless.

“The City goes out of its way to make it so,” he said. “What makes this travesty even greater is the fact that the City Attorney’s office was not truthful in its dealings in the UD case, and in fact went out of its way to make a tenant homeless. I have mentioned that the unit was uninhabitable. I say this with authority because prior to DePablo’s unit from being hauled away, I hired a mobile home expert to look at the unit. His name is Greg Filan. Mr. Filan found numerous health code violations that made the unit uninhabitable.”

Trailer park resident Cris McLeod, who is the Secretary of the Residents Association, said he had electricity permanently turned off along with eight other tenants in 2010.

He said he had to live without hot water, heating, and cooking facilities for two weeks.

McLeod said long-time residents who haven’t signed new lease agreements are threatened with eviction if they are late with rent.

He said residents are told they would be given extra time to pay rent if they sign new lease agreements, which residents say take away some of their rights.

“Last year the City took me to court in an untenable eviction case that had no sound legal reason,” McLeod said. “The unlawful detainer case cost $6,000. This can be financially devastating and prevent someone from defending themself. We are a low income family as most are here and are being denied access to the courts financially.”

McLeod said his situation wasn’t unique at the trailer park.

“We have had tenants drop dead from heart attacks in the middle of lawsuits with the City,” McLeod said.

Van Sickle said she hoped the lawsuit would make the community aware of their issues at the trailer park and hoped their efforts for action would finally be taken seriously.