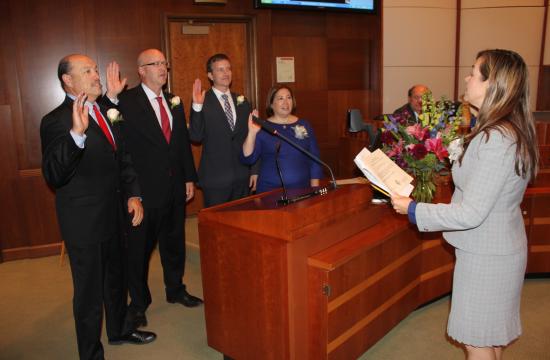 The saga of Santa Monica’s Village Trailer Park (VTP) at 2930 Colorado Avenue continues, as a new look City Council sworn in Tuesday narrowly decided at its first meeting to rescind the second reading and adoption of a development agreement (DA).

A pair of 4-3 votes have allowed City Hall to withhold enforcing the previously approved DA and a gave Council members and City staff additional time to scrutinize the project that may still replace Santa Monica’s oldest communities with a 377-unit mixed-use housing development called “East Village.”

Council member Kevin McKeown made a request to discuss whether the newly seated council should have a discussion reconsider the previous council’s Nov. 27 vote adopting the second reading of Marc Luzzatto’s proposed development.

That request was approved 4-3, allowing the council to actually discuss whether or not to rescind the previous council’s vote allowing the East Village DA to move forward.

The council then voted 4-3 to rescind the second reading and adoption of the East Village DA.

The two votes effectively earned VTP residents and supporters a bit of a reprieve, but Tuesday night’s votes do not necessarily eliminate the DA.

Indeed, McKeown said the intent was not to preclude any developments from being built at VTP but rather to address specific issues and concerns, such as possible deficiencies in affordable housing and whether or not City Hall is following its own laws.

McKeown said it was necessary to reconsider the last council’s adoption of the East Village DA at the Dec. 11 meeting because there may no longer be a chance to do so later.

“The action the council took November 27th will become effective 30 days after that second reading,” McKeown said. “That ordinance will then be in effect. At that point it will be more difficult for us to reconsider this matter.”

The council member added new information was been made available after the Nov. 27 vote.

“Since the second reading, I think we have received considerable additional information on conflicts between this development agreement and our Affordable Housing Policy, among other things,” McKeown stated, adding a plethora of neighborhood groups and residents have sent emails requesting the council reconsider its vote.

One of those new pieces of information was a report to be presented to the Planning Commission of the Bergamot Area Plan. McKeown said the report may indicate the goals of the Land Use and Circulation Element (LUCE) would not be met if certain affordable housing provisions were not met.

Sue Himmelrich, an attorney with the Western Center on Law and Poverty, said the DA approved by the previous council is “illegal.”

“This development agreement does not comply with the General Plan and the Specific Plan of the City of Santa Monica and, consequently, is void,” Himmelrich told Council members.

Luzzatto briefly spoke during public comment and expressed his frustration with the process.

“We have been working on this for six-and-a-half years. We spent months and months negotiating with the Rent Control Board, and with representatives of the City to arrive at a Memorandum of Understanding, and, in reliance of that, spent a tremendous amount of money … in arriving at the DA that is now executed,” Luzzatto told council members. “We believe we have a binding agreement.”

He added he has made several concessions that have been overlooked by opponents of the DA, such as a land grant and a plan to build 40 subterranean parking spaces.

According to plans, as many as 99 rent-controlled units currently located on the VTP property will be lost and in its place will be a development expected to feature 161 apartments and 216 condominiums.

In mid-November, the Santa Monica City Council finally green-lighted the mixed-use housing project helmed by Luzzatto after two days of deliberation and discussion. The two days of deliberation and discussion capped off a six-year battle that drew the ire of those who would either be displaced by the elimination of VTP or adversely affected by potential impacts of a new development such as increased traffic.

Prior to the vote, Luzzatto made some concessions to his project, such as agreeing to reduce the overall size of the project by eight percent and feature 14 percent fewer units. The development would have retained 10 of the original trailer spaces (closure of 99 spaces).

McKeown expressed concern last month that several dozen VTP residents would be displaced in favor of a development that was not consistent with the LUCE. There were also questions of soil quality and land value.