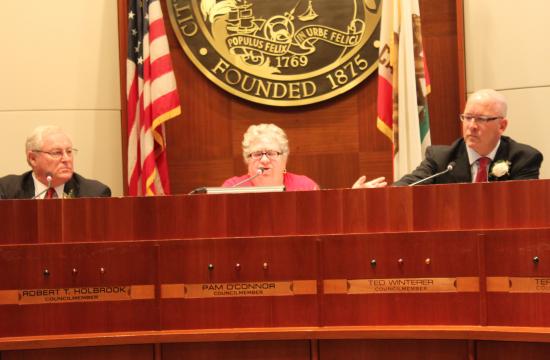 The vote for mayor was at an impasse for four rounds of voting, with former Mayor Pro Tem Gleam Davis and Council member Kevin McKeown both nominated for the mayoral post. During the first four rounds, none of the candidates received the minimum four votes necessary to be selected mayor.

The roll call finished with a 3-2-2 count: three votes for O’Connor and two each for David and O’Day. O’Connor received votes from herself, Vazquez, and Council member Bob Holbrook; Davis had both her vote and O’Day’s, while McKeown and Winterer paired together.

On the second round of nominations, Winterer suggested Davis and McKeown split the two-year mayoral term, with McKeown serving as mayor through 2013 with Davis remaining as Mayor Pro Tem another year. In 2014, Davis would serve as mayor and McKeown as mayor pro tem. Vazquez again submitted O’Connor’s name, while O’Day again nominated Davis.

The second ballot also ended in a 3-2-2 vote, with the same three votes for O’Connor but only McKeown and Winterer supporting the McKeown-Davis ticket. Davis and O’Day sided together on Davis serving a full two-year term.

An impasse remained on the third ballot. O’Connor was again nominated by Vazquez, but McKeown altered Winterer’s previous nomination by suggesting Davis serve as mayor in 2013 and he in 2014. O’Day again nominated Davis for two-years.

O’Connor received the same three votes, with Winterer and McKeown voting in favor of the Davis-McKeown ticket. For a third time, O’Day supported Davis’ vote for herself.

The fourth round of nominations began with Holbrook submitting O’Connor’s name for mayor, followed by Winterer’s nomination of McKeown. For a fourth time, O’Day nominated Davis.

The vote was 3-2-2 yet again: three for O’Connor and two each for Davis and McKeown.

Opening the fifth round of nominations was Holbrook, again proposing O’Connor. Winterer again suggested his first recommendation of McKeown-Davis. The impasse was finally broken when O’Day joined the bloc of three council members supporting O’Connor’s candidacy.

Both O’Connor and O’Day will serve in their respective roles as mayor and mayor pro tem through 2014.

The new look council officially took form a few minutes prior to the votes, with Davis, O’Day, Vazquez, and Winterer sworn in by City Clerk Sarah Gorman. All four council members were elected to the dais Nov. 6 and will serve on the dais through 2016.

O’Connor, Holbrook, and McKeown are incumbents on this council, serving through 2014.

Making his final appearance on the dais before the swearing in and transition, Bobby Shriver gave a few words about his experience as a council member.

Bloom, who assumed his new role in Sacramento as an assemblyman last week, was not present.

Prior to the oath and convening of the new council, the new members of the Santa Monica-Malibu Unified School District and Santa Monica Rent Control Board were sworn into office.

The first orders of business for the new council included: a possible tax exemption for the sale of the House of Rock; the consideration of an Affordable Housing Policy recommendation; a proposed policy to “slowdown” the consideration of pending development agreements; and, whether or not to reconsider a vote favoring the development to replace Village Trailer Park.