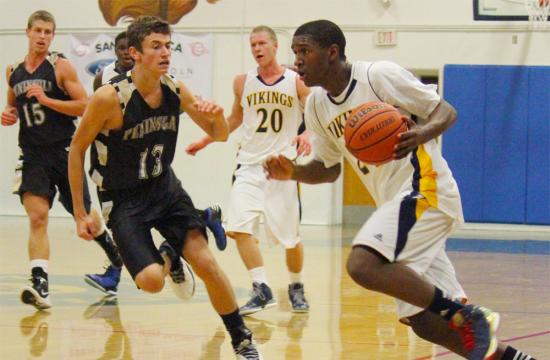 Santa Monica High School defeated Penninsula in basketball 74-62 in a close game until the Vikings pulled ahead of the Panthers late in the third quarter with a 15 point run at home Thursday night.

Samohi’s forward Jordan Matthews, who scored 32 points in the game, thought that the Vikings pulled themselves together to win the game in the third and fourth quarters.

“We came out sluggish and my attitude personally was pretty bad,” said Matthews. “We decided in the second half to pick it up because we know how good we are when we all just want to play on the same page and we showed them this in the second half.”

The difference in the second half centered around Samohi’s ability to pass the ball around and utilize Vikings guard Erron Vaughn who put up 12 points in the third and fourth quarters.

Panthers forwards Bo Prock and Matt McFarland menaced the Vikings in the first two quarters scoring 18 points between the pair.

But in the third and fourth quarters, the Vikings defense held the tandem to two total combined points.

Momentum shifted in the game after Samohi guard Trevis Jackson passed the ball to Vaughn who drove the ball up the key and made a layup for the deuce to put the game at 48-46 shattering the confidence of the Panthers defense in the process.

Jackson then made a three-point shot of his own on the Vikings next possession to put the game at 51-46 furthering the woes of the Panthers.

From there a cluster of Samohi shooters, including Matthews, hit their shots to extend the lead to 61-46 before the Panthers made a basket.

“It all starts on defense,” said Matthews. “If everybody is down there talking, getting involved in the screens and moving through the screens, then we are all ready to come back on offense and the points will come.”

Next game for the Vikings is at home against Legacy Saturday, Dec. 15 at 1 p.m.