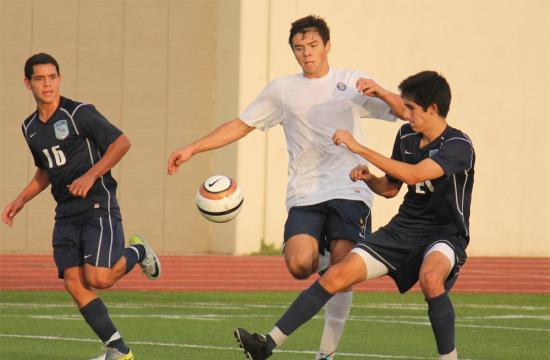 Santa Monica High School lost against 2011-2012 CIF Champions Crescenta Valley 2-1 in the Westside preseason tournament in a game where the Vikings fought hard to hold their own against the Falcons at home Tuesday afternoon.

Vikings Soccer Head Coach Serafin Rodriguez thought that the Vikings played well in their loss to the Falcons.

“The game went better then we thought,” said Rodriguez. “We are a very young team. We lost seven seniors last year so we are trying to get the guys experience this year.”

Rodriguez thought that the Falcons were “as good of a team as they were going to play this year.”

Samohi Forward Keone Kojin, an exchange student from Brasil, scored a goal for the Samohi in the first half the game to put the Vikings up 1-0.

Kojin is an exchange student from Brasil attending Samohi.

“Keone is a senior and has very fancy skills on the field,” said Torres.

Crescenta Valley came back ten minutes later with a goal by Falcons forward Pablo Sotillo to tie the game up 1-1 at the end of the half.

Matt Ryan scored the second goal for the Falcons to make the score 2-1 in the middle of the second half.

Samohi attempted a comeback late in the second half stacking their offense sending in Vikings forward Omar Sanchez after he had been benched for receiving a yellow card.

“We pulled Sanchez out because its a rule that when you get a yellow card, you need to be pulled off the field,” said Torres.

But time expired before Samohi could score another goal handing Crescenta Valley the game.

Next game for the Vikings against Palos Verdes in the Westside Tournament at home on Thursday, Dec. 6.