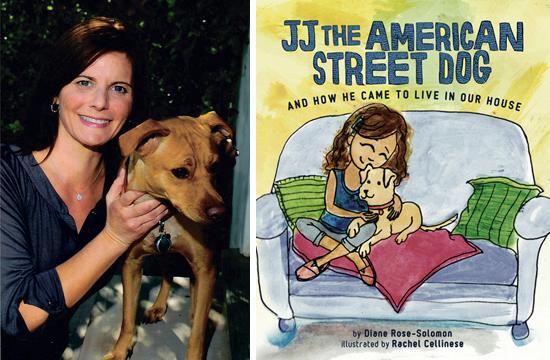 Santa Monica resident Diane Rose-Solomon has published a children’s book about animal rescue called “JJ The American Street Dog and How He Came to Live In Our House.”

It is the first book in a series by Rose-Solomon who is a Certified Humane Educational Specialist.

The story addresses animal adoption issues using colorful, whimsical illustrations to tell the story of Maya and her family.

Rose-Solomon said children aged four to nine would identify with six-year-old Maya who has wanted a dog for as long as she can remember.

“When her uncle finds a homeless puppy JJ, Maya begs to keep him,” she said. “But her mom isn’t sure. In the end, Maya and her family learn that adopting a rescue pet is a win-win. JJ gets a loving home, and Maya gets the dog she’s always wanted.”

She said the book is an exciting and uplifting story that teaches children and adults about animal homelessness, basic animal care, spay and neuter (worded appropriately for children), pet adoption, and the unconditional love people get from their family pet.

“The timing of the book is perfect as

LA just voted to ban the sale of commercially bred pets in pet stores,” she said.

Seventeen years ago Rose-Solomon and her husband were thinking about purchasing a Golden Retriever, which were the couple’s favorite breed and at the time they knew nothing about animal rescue or pet homelessness.

Before they went too far in the process, she said their friend called to tell them he had found a puppy on a soccer field.

“He knew we were thinking about getting a dog and thought that maybe we would want it,” she said. “Despite our concerns that it wasn’t the breed that we wanted, we agreed to take a look at the pup. Well, it didn’t take more than five seconds to fall in love with the adorable puppy.”

She said they put ads in the paper looking for his owner and when no one surfaced they decided to adopt him.

She said she then realized then that it wasn’t about the breed, it was about the dog.

“I also learned about animal adoption and got involved with a small grass roots rescue and medical care organization,” she said. “From there my passion grew and I knew that if more people knew how important it is to adopt, and that the dog you adopt is just as fabulous as any dog you could buy, that it could make a difference. In fact, when people know that adopting a dog saves a life, that could make a difference too.”

Rose-Solomon said she sat down one day just to write out her story.

She said she had no intention of writing a children’s book.

“In fact there was nothing pre-meditated about it at all,” she said. “When I was done I looked at it and realized that with a little – well, a lot actually – of editing it could be a children’s book. I had taken a children’s book writing class years ago and remembered a few of the elements that are common in children’s books and was able to incorporate them. I submitted it to major publishers and didn’t get anyone to bite. So I decided, with support from a women’s group I work with, to self-publish.”

Her next task was to find an illustrator.

She said she had a vision of how she wanted the book to look: fun, whimsical, and colorful.

She said she also needed a book designer who had spatial and graphic abilities, as well as experience pulling together the words and the artwork and making it look like a book.

“A friend of mine had just self-published his first children’s book and was able to offer a lot of the research he had done to find a high quality printer at the best price,” she said. “While the book was at the printer I started creating my website and getting more involved in social media to help promote the book once it was printed.”

During the process, she said she learned that she needed to follow her heart in this project.

She said she knew that she had an important message to share and if the book was professional looking, visually appealing, and told a story, that she had a shot at making it happen, whether it was accepted by a major publisher or not.

“When I first decided to self-publish I was concerned that the book wouldn’t be taken as seriously as if it had come from a major publisher,” she said. “What I learned was that, for the most part, only big name authors get the PR and marketing benefits of a big publishing house. Everyone else has to do their own marketing and PR, but they still have to share much of their profit with the publisher. Over the last few years, self-publishing has gotten much more widely accepted, and many distribution channels are now servicing independent publishers. There is also a lot of support available from groups like the Independent Book Publishers Association, so I decided that I had the tenacity to self-publish and I would figure it out as I go.”

She said there’s thought about a sixth as well.

A portion of profits will go to animal rescue organizations so the book raises both money and awareness.

Rose-Soloman has lived in Santa Monica for almost 18 years, mostly in the Sunset Park neighborhood.

“I live on one of the only hills in Santa Monica and get some of the best sunsets off our deck,” she said. “If I can speak for my husband who took up surfing a couple of years ago, he’ll tell you he’s never leaving Santa Monica. He just needs to be near that beach.”

The hard cover book sells for $16.99 and is available online at www.SOP3Publishing.com.