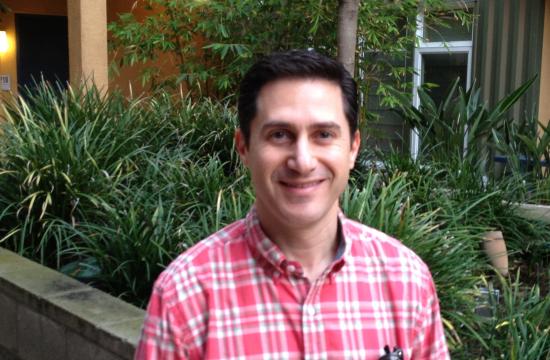 Santa Monica College’s 2012 Faculty of the Year winner is Eric Oifer — an accomplished scholar and widely praised campus leader who is as well known for his intellectual acumen as much as his pioneering teaching methods.

In naming the winner, the SMC Academic Senate also announced that it is nominating the political science professor for the statewide Hayward Award, which honors outstanding community college faculty who have a track record of excellence in teaching and professional activities and have demonstrated commitment to their students, profession and college.

The Hayward Award is sponsored by the Academic Senate for California Community Colleges.

“Eric Oifer is an incredibly fine human being, colleague, scholar and instructor and a dedicated environmentalist and global citizen,” said SMC Academic Senate President Janet Harclerode. “We are proud to nominate him for the Hayward Award and grateful for the opportunity to extol his service.”

Oifer, who has been teaching a variety of political science courses at SMC since 1999 – including political philosophy, environmental politics and the politics of gender – received his Ph.D. in political theory from USC.

“This honor makes me think of a favorite quote by naturalist Ben Gadd – ‘I am lucky beyond words. I have all three things needed to make me happy: I live in a place I love, with people I love, doing work I love to do,’” Oifer said. “It is an incredible honor to be recognized by my colleagues in this way. I wish everyone at the college could experience what I experienced upon being nominated by my mentors and good friends Christine Schultz (chair of the Social Science Department) and (philosophy professor) Amber Katherine.”

Oifer is the author of several articles in academic journals and has presented widely throughout the state at scholarly and academic organization conferences on topics ranging from “Masochism and the Military-Style Education” to “Improving Institutional Effectiveness.”

Among colleagues he is best known as an articulate and thoughtful leader who served as Academic Senate President in 2009-11 and has served on countless academic and planning committees. Currently, he is chair of the Academic Senate Environmental Affairs Committee.

In the classroom he has made his mark as a teacher who not only challenges his students intellectually but also seeks to help them discover purpose in their lives and develop grit. In fact, he developed and is spearheading SMC’s recently adopted – and somewhat pioneering – GRIT initiative (Growth, Resilience, Integrity, Tenacity). The initiative is based on research, he says, that shows that “grit and perseverance, rather that test scores and grades, are the keys to student success in school and in life.”

Recently, he has focused much of his attention on environmental issues and has “greened” his curriculum.

“His genius is to turn the most difficult texts (Plato, Aristotle, Hobbes, Locke, Marx, Nietzsche, Foucault, etc.) into accessible and uplifting lessons for his students,” said the SMC Academic Senate letter nominating him for the Hayward Award. “He has done this through his work to green his courses and to foster resilience, perseverance and purpose in his students.”

Oifer was recently awarded a sabbatical for fall 2013 to study the use of nature writing to teach environmental politics and ecological democracy that will result in an academic conference presentation and a book that he has already begun to write.