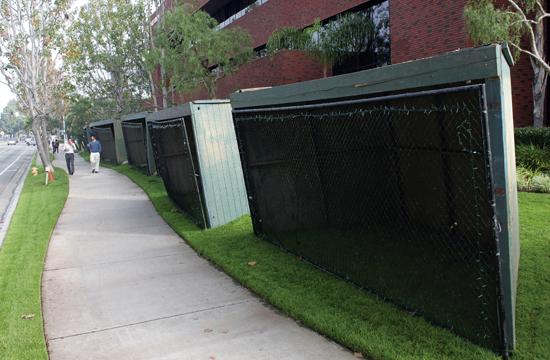 Santa Monica’s controversial Nativity scenes, which had graced the lawn of Palisades Park for almost six decades before City Council banned them from the park this year, have found a new home on private property at 2700 Ocean Park Boulevard.

With an opening ceremony scheduled for this Sunday at 3 p.m., Nativity scenes organizers are inviting the community to visit its 14-lighted scenes with life-size figures depicting events surrounding Christ’s birth that will remain on display through the first week of January.

The City Council voted June 12 in favor of the ban to quell controversy that erupted after a small group of atheists used new rules and a City-mandated lottery to win most of the available display space last year in Palisades Park.

The lottery was employed in order to allocate display opportunities in an unbiased manner as the number of groups requesting use of Palisades Park under the City Hall exception far exceeded the space available.

Due to the lottery system, most spaces were allocated to displays that opposed religion.

Nativity scenes backers said the city’s ban on the Nativity scenes and other similar displays achieved the atheists’ expressed goal of ousting them from the park in violation of display sponsors’ constitutional rights of free speech and free exercise of religion, and sued the city in federal court.

U.S. District Judge Audrey B. Collins ruled Nov. 19 against the Santa Monica Nativity Scenes Committee, which had two weeks earlier filed a request for a preliminary injunction to prevent Santa Monica from enforcing its ban against Nativity scenes along a stretch of Ocean Avenue. The Committee claimed the ban violated the group’s First Amendment rights under the Establishment Clause.

The preliminary injunction motion hoped to allow Nativity scenes to be displayed at Palisades Park as their federal lawsuit plays out in the United States District Court.

However, the lawsuit was dismissed Nov. 29.

“We will continue to fight for free speech and the free exercise of religion as we continue to seek restoration of the Nativity Scenes to its historic home in Palisades Park,” Jameson said.

The new location between Clover Park and 28th Street will not have a traffic lane reserved for viewing and motorists are asked not to impede traffic when driving past the Nativity scenes.

Jameson said that visiting the display had become a cherished tradition for multiple generations of families.

“We are deeply grateful for the use of this new site to allow all of Santa Monica’s distinctive Christmas Story to continue spreading the message of joy, hope, and peace found in the Christ child’s birth to residents and visitors,” he said.