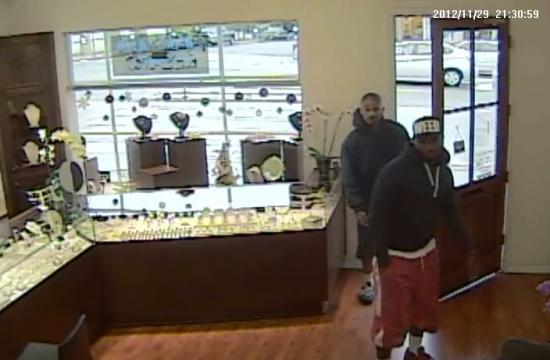 Santa Monica police are interested in identifying and speaking with two “persons of interest” who may be linked to the robbery of Cabochon Fine Jewelry at 1426 Montana Avenue in Santa Monica on Friday, Nov. 30 at about 1:20 p.m. where half a dozen people inside the store were pepper sprayed.

The two men (pictured above and right) are seen entering a jewelry store on Wilshire Boulevard and posing as customers before the robbery on Montana Avenue.

The two men, who police say match the robbery descriptions, exited this jewelry store on Wilshire without making a purchase and entered a vehicle that was similar to the one the suspects fled in after the robbery — a dark-color late 90’s model Honda four-door.

When police responded to the Montana jewelry store after the robbery, victims told officers the two suspects sprayed everyone with pepper spray before they used a hammer to smash a jewelry case to steal several pieces of jewelry.

SMPD Sgt. Richard Lewis said the suspects fled from the location through the front door and were last seen southbound in Alley 14.

Lewis said the suspects were described as male blacks, in their 20’s to 30’s, 5’10” to 6’0″, thin build, wearing dark colored hooded sweatshirts, light colored pants, tennis shoes, and some kind of mask covering their face.