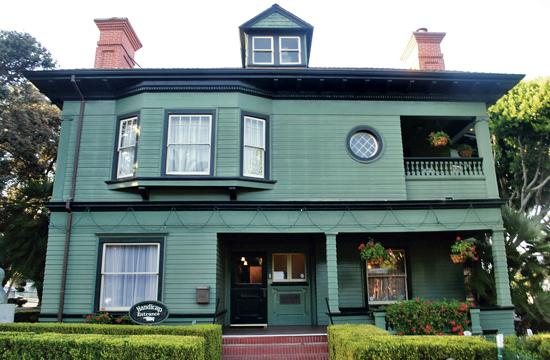 For more than two decades, under the leadership of Parks and Open Space Operations Supervisor Mariano “Tito” Molina, the City of Santa Monica has provided an outside contractor to maintain Santa Monica’s park-like properties, which includes the Museum.

The Museum is now fully responsible for the interior and exterior of the property, per the recent letter from Harris.

California Heritage Museum Executive Director Tobi Smith said she and the only other full-time employee at the museum are unable to carry the museum’s duties along with the landscaping duties.

“We just want to find someone in the landscape business – a gardener, even – to help us,” she said. “We want to start a gardening club here (in the museum). And that’s very common in museums that have property.”

Needless to say, Smith said she would be enthused if the city continued to offer its support to the museum’s maintenance.

“Although (the City of Santa Monica) won’t continue their support any time soon, we will have to make the best out of it,” Smith said.

But Smith is not discouraged from the duties and labor that are put into the museum.

She has a long history of devotion to the arts and museums.

A few decades ago, she was noted for writing grants for Southern Californian museums.

In the mid-1980s, the then-director of the museum asked her to write grants for the Heritage Museum.

“Then, all of a sudden, (the director) was offered a full-time position at Cal State Northridge and so I was asked to be the director,” Smith said.

Once Smith accepted the job, she traveled from Ojai, her former place of residency, to Santa Monica using the public transportation for the first few years.

However, the museum board offered Smith an apartment a block away from the museum, which facilitated the job.

Since she has a long history working for the museum, Smith said she is dedicated to the duties of the museum.

She encourages the community to pitch in ideas to continue future exhibitions.

“I always need ideas (for exhibitions) as long as we can afford it,” Smith said. “Wells Fargo is a huge supporter for the exhibitions at the museum and has been one for 20 years.”

The help from corporations manages to keep the museum running. After their $30,000 loss for a city ordinance, the museum is in a fragile state.

“There was another city problem in which we lost $30,000 earlier this year,” she said. “This allowed for me to pay my staff assistant salary. My staff assistant’s salary and mine hasn’t been paid in a very long time. Pretty soon it’s going to be a question of whether or not I am going to lose my house.”

Despite the severe budget problems the museum is facing, Smith hopes that community support for the landscaping will not only alleviate a couple of museum setbacks, but will encourage more community involvement.

Anyone who is able to lend support can contact Smith at 310.392.8537 or email calmuseum@earthlink.net.

For more information about the museum, visit www.CaliforniaHeritageMuseum.org